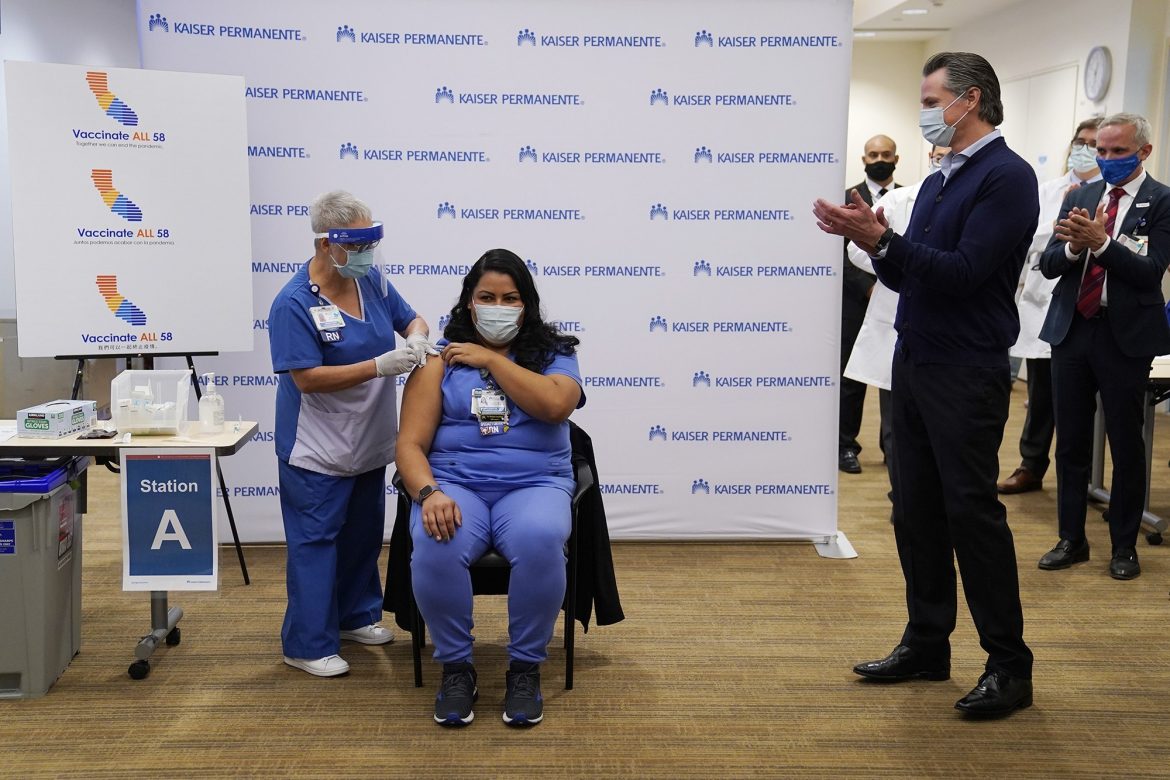 Health care workers at a Los Angeles hospital were among the first Californians to receive the COVID-19 vaccine Monday, launching a fierce battle over who gets to be next in line.

The state hasn’t yet specified which groups will follow health care workers and nursing home residents, beyond hinting they will be “essential workers and others at highest risk of becoming infected or severely ill with COVID-19.” This has revived one of the pandemic’s most persistent questions: Who, exactly, is an essential worker?

Teachers unions, led by the powerful California Teachers Association, say they should be next in line for the vaccine so students can return to in-person learning. Other advocates say employees who can’t work remotely — like grocers, meatpackers and farmworkers — should be prioritized ahead of teachers. Meanwhile, Uber CEO Dara Khosrowshahi last week told Gov. Gavin Newsom that ride-hail drivers deserve priority access.

Newsom on Monday sought to quell concerns that well-connected Californians would be able to shortcut the vaccine distribution process, unveiling a $32 million public education campaign called “Vaccinate All 58” — a reference to the state’s number of counties.

The governor added that he wouldn’t take the vaccine ahead of those “who are more deserving.”

Still, once vaccine doses start to be sent directly to doctors and local pharmacies, the potential will mount for people to pull strings to get the valuable shots, CalMatters’ Ana Ibarra reports.

The coronavirus bottom line: As of 9 p.m. Monday night, California had 1,585,044 confirmed coronavirus cases and 21,046 deaths from the virus, according to a CalMatters tracker.

California cracked down on Big Tech on Monday. Attorney General Xavier Becerra, fresh off a lawsuit against Facebook, accused Amazon of withholding information amid a state investigation into its coronavirus safety protocols and asked a superior court judge to order the e-commerce giant to comply with outstanding subpoenas, CalMatters’ Jackie Botts reports. Becerra’s office alleges that Amazon has “failed to adequately respond” to requests for data on coronavirus infections and deaths at their California facilities, as well as specific details about their safety measures — charges Amazon denies.

Also Monday, state regulators and rideshare giant Uber clashed yet again. Regulators demanded Uber pay $59 million and share within 30 days detailed information on sexual assault and harassment cases in order to continue operating in California. Uber last year released a report detailing 6,000 claims of sexual assault and harassment in the U.S. in 2017 and 2018 among drivers and riders, including 464 rapes. Regulators want to investigate the cases that occurred in California, but Uber has so far refused to release the information, citing privacy concerns.

Republicans may be vastly outnumbered in the state Legislature, but there’s hope for bipartisanship yet! Senate President pro Tempore Toni Atkins, a San Diego Democrat, on Monday named Sen. Andreas Borgeas, a Fresno Republican, as chair of the Senate Committee on Agriculture. The decision to appoint a Republican as chair of a legislative committee is “somewhere between infrequent and rare,” but not “too unusual in the Senate,” according to Alex Vassar, communications director for the California State Library. Still, Borgeas will be the only Republican to chair a committee in either house of the Legislature.

3. Nichols likely out for EPA position

Speaking of Biden’s administration, it appears increasingly unlikely that Mary Nichols, chair of the powerful California Air Resources Board, will be chosen to lead the federal Environmental Protection Agency. Biden apparently backed away from Nichols, who was widely seen as the position’s frontrunner, after more than 70 environmental justice groups accused her of having a “bleak track record in addressing environmental racism,” the New York Times reports. At issue is Nichols’ support of California’s landmark climate change program, which caps greenhouse gas emissions by allowing companies to buy and sell pollution credits. The environmental justice groups say the program has resulted in disproportionate levels of pollution in poor communities of color.

It’s a criticism Newsom has also had to contend with. The governor last week chose as Nichols’ successor Liane Randolph, who said one of her main priorities would be addressing pollution concentrated in low-income communities of color. Randolph will also oversee a reevaluation of California’s cap-and-trade program.

California’s state prison system has been delaying investigations into employees accused of offenses including sexual misconduct with prisoners, lying to investigators, abusing spouses or driving drunk — costing taxpayers hundreds of thousands of dollars per year, according to a recent report from the state Office of the Inspector General. The delayed investigations have resulted in the state unnecessarily paying nearly $1 million in salary and benefits to accused employees over the past 18 months, the report found. Although prison officials are supposed to report employee misconduct within 45 days of discovery, it frequently took them much longer — nearly 10 months in one case.