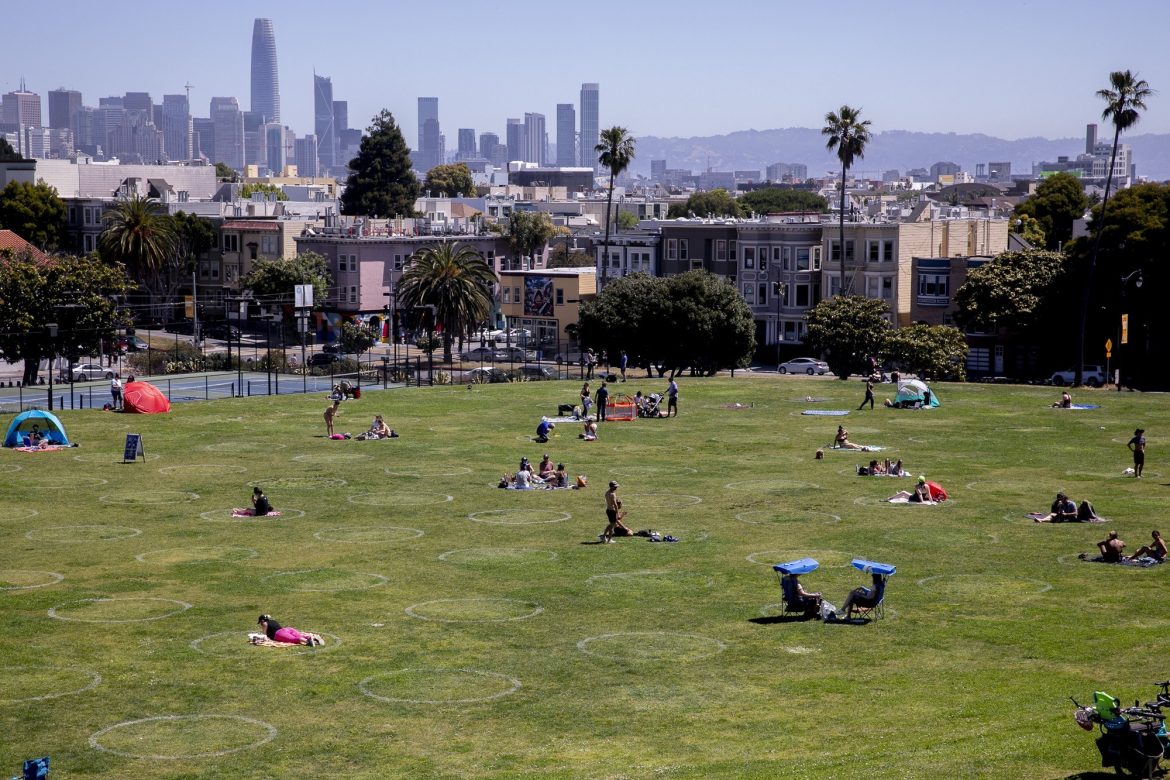 While other states experience deadly surges in coronavirus cases, a national public health expert says the Golden State “holds a lesson for all of us.”

As COVID-19 cases surge alarmingly around the nation, California is in its own zone. And it’s a better place than it was.

Fourteen states, including Kansas and North Dakota, recently set records for the number of patients needing to be hospitalized, but California’s hospitalizations have declined.

California “holds a lesson for all of us,” Dr. Ashish Jha, dean of the Brown University School of Public Health, recently tweeted, praising “strong leadership” from Gov. Gavin Newsom and the state’s health and human services chief, Dr. Mark Ghaly.

Jha credited the state’s “huge boost” in testing and county-by-county “micro-targeting” as “smart policies” that have helped control the virus. California has averaged nearly 124,000 COVID-19 tests each day for the past two weeks.

“Instead of approaching lockdowns as light switch (on or off), CA approach is that of a dimmer switch…Obviously we don’t know if it will last but so far, so good,” he wrote.

The kudos sound a far different note than five months ago, when the state was blasted for reopening too quickly. That scorn, in turn, had followed praise for California when Newsom became the first governor to order a statewide lockdown in March to control the spread.

The state’s tier system “is working really well,” said Dr. George Rutherford, a University of California, San Francisco epidemiologist. Under it, counties may reopen – or must shut down – businesses and schools depending on local levels of virus transmission. That revised system was put in place in late August.

The rate of California positive tests has dropped from a summer high of 7.5% to 2.6%. That’s less than half the national average and far below states like North Dakota, where test positivity has reached nearly 11%.

“You have to be very encouraged by those numbers,” Rutherford said.

The recent progress, however, could be temporary, some public health experts caution. Since the pandemic started, California has seen more than 880,000 cases and more than 17,000 deaths from the novel coronavirus.

Many Californians are experiencing pandemic fatigue—tired of sheltering at home, and desperate to return to work and school.

As this winter’s flu season approaches, with the possibility of a “twindemic” or “third wave” of COVID-19 cases, Californians are being warned against complacency. Rutherford noted that out-of-state visitors to California could bring the disease with them, particularly during the upcoming holiday season.

“How long is that going to take to lap up on our shores?”

Meanwhile, California appears to have learned the lesson of reopening too soon, public health experts note. The state reported two novel coronavirus cases on Jan. 26 and turned earlier than most states to unprecedented local, then statewide, shelter-at-home orders. The San Francisco Bay Area issued the nation’s first shutdown order in mid-March, shuttering schools and all but essential businesses like grocery stores.

California seemed to dodge the worst of the first wave of COVID-19 cases that plagued New York City and other regions. After state and local officials allowed various business sectors to reopen in the spring, however, California cases surged to a disturbing high of more than 12,000 in a single day, on July 22.

In June, Gov. Gavin Newsom issued a statewide mask order after weeks of deferring many such decisions to local health authorities.

The summer surge of California cases prompted officials to scrap a county “watch list” system with color-coded tiers based on data the state monitors. “Instead of just closing things, we followed what science told us – you can move activities outdoors,” said Dr. Mark Ghaly, secretary of the state health and human services agency.

Even as state officials this week agreed to ease restrictions on theme parks and professional sports, some Californians have pushed for a faster reopening pace, citing the pandemic’s crushing of the state’s economy. More than 2 million Californians were  unemployed in September and officials project a drop of $32 billion in state revenues for the next year.

Ghaly also credits California’s deep investment in testing capacity for the state’s ability to control the spread of COVID-19.

“The picture is worth a thousand words. When you see leaders behaving (this way), it makes a huge difference,” Ghaly said. He diplomatically dodged questions about the politicization of COVID-19 response in a country where some governors and the President have declined to wear masks themselves or practice social distancing.

California’s already significant laboratory capacity helped the state get up to speed, Rutherford added. Then, too, COVID-19 treatments have improved significantly since the start of the pandemic, helping lower death rates in California and nationwide.

But Californians cannot rest, public health experts say, because the virus won’t. Winter is coming. People are moving indoors. Far-flung families may gather – against all public health recommendations – for the holidays.

“We’re doing great but it’s too soon to call it, which way it’s going to break,” Rutherford said. “Hopefully…we’ll be vigilant and on guard and ready to respond.”