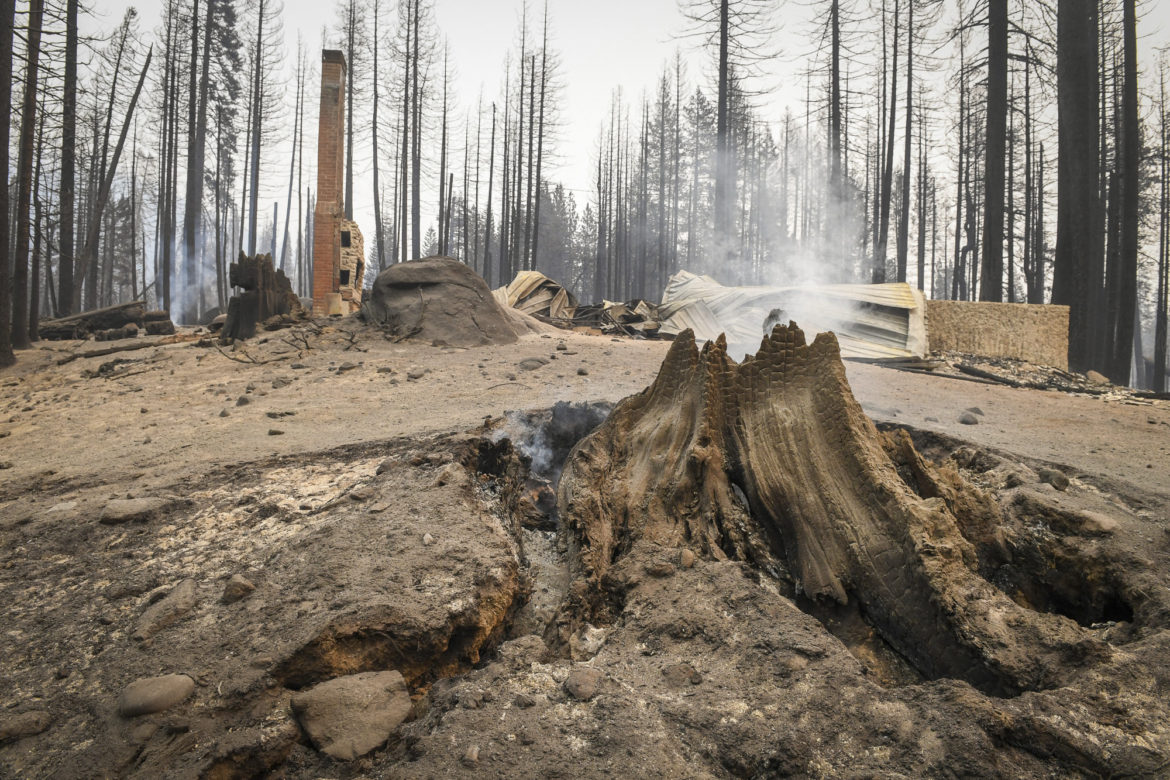 A tree stump smolders in front of a burned cabin in the Camp Silver Fir area on the north of Huntington Lake on Sunday, Sept. 13, 2020. Fire officials said a fire tornado blew through the area at some point last week burning cabins and knocking down many trees.

The record-breaking fire season could have lasting effects on the economy of California’s mountain communities.

It was bad enough that 2020 announced itself with a global pandemic that cratered the world economy and kept many people confined to their homes. Then, just as vacationers were tentatively returning to California’s rural lakes, parks, trails and campgrounds, they turned their minivans and campers around, fleeing unpredictable wildfires and a pall of noxious smoke.

As expected, the economy has taken a big hit: A new report concludes that California’s wildfires have deep and lasting effects on the health of the Sierra Nevada’s multi-billion-dollar tourism economy.

Businesses in the region that cater to hikers, skiers, backpackers and other outdoor enthusiasts fear there could be long-term impacts from visitors’ lingering concerns and misconceptions about travel in fire-ravaged parts of California.

Visitors “will drop off,” said Ram Gurnani, who operates a tour company outside of Yosemite National Park. “There are many places in the world tourists can go. We are not the only one.”

While the economic effects of previous wildfires endured for one to three weeks after the fires were out, the report warns of longer-lasting concerns.

“Nearly one in four of all the summer/fall leisure trips to the Sierra Nevada by nonresidents over the last 5 years were influenced by wildfire considerations, and this is expected to continue in the future without mitigation,” the report concluded.

Finding that the state’s spine of mountains and forests drives a significant tourism economy, the report made broad recommendations about reducing visitors’ fears by preparing for fires, informing the public and communicating about conditions post-fire.

Even small fires that shoo visitors away can cripple the local economy. Last year, travelers to the Sierra Nevada, which includes all or part of 22 counties, generated $3.6 billion in tax receipts and supported more than 36,000 jobs. Mono County, which hosts year-round tourism in Mammoth Lakes and surrounding areas, relies on the industry for about 53% of its government budget.

The impacts are felt even outside fire zones, in places like Fresno, which is a launching pad to a handful of state and national parks. Hotels had begun to rebound from virus-related shutdowns, but the fires and smoke made visiting the region’s outdoor treasures difficult.

“Our hotels are busy — with evacuees, firefighters, the National Guard,” said Layla Forstedt, chief executive officer of the Fresno Convention & Visitors Bureau. But the current rush on rooms is no substitute for the consistent tourism traffic local businesses expect, she said. “I’m happy that the hotels are busy, but not happy why.”

California’s largest fires are currently raging in the Sierra Nevada, including the Creek Fire, which has burned through a quarter-million acres and forced dangerous nighttime helicopter evacuations of hundreds of campers. The Sierra Nevada has 163 million dead trees, making it the region hardest-hit by an epidemic of tree mortality that adds to the combustibility of its forests.

When high-profile fires burned in 2018, more than 10% of potential visitors canceled trips. The Ferguson Fire, which closed Yosemite National Park for three weeks during the summer season, created a $46 million loss in direct and indirect visitor spending in Mariposa County, according to the study.

Multiple fires are burning in wilderness areas in Yosemite, posing just enough of a threat to dampen tourism. Gurnani, who owns Crossroads Tours, said business is down 80% from this time last year. Cancellations have crushed his income.

“With these fires, everyone is cancelling,” Gurnani said. “Even if you go into the park, you can’t see Half Dome from Glacier Point because of the smoke. It’s not a good experience for people to be in the park right now.”

The Sierra isn’t the only part of the state to take a big tourism hit from this year’s wildfire outbreaks, which are the worst in state history. Earlier this month, the U.S. Forest Service closed all 18 of California’s national forests because of the severe fire threat. More than two dozen state parks are closed, and some national parks have closed or are open with restrictions.

California’s oldest state park, Big Basin Redwoods, was devastated when fire destroyed 75 structures, including the park’s headquarters which is listed on the National Register of Historic Places. The park will be closed for at least a year, with its one million annual visitors forced to find other places to visit.

The closures came at an awkward time. Campgrounds were full around the state, and travelers seemed to be purposefully seeking wilderness experiences perceived to be safe from the virus.

To Masood Madani, who owns Masood’s Lodge in Boulder Creek, a gateway community to Big Basin Redwoods Park, the combination of the virus and the fires has been devastating.

He bought the small hotel six months ago and was in escrow when the pandemic began. Then the fire swept through, part of the CZU August Lighting Complex fire. “I tell everyone that all we need for 2020 is an earthquake and that will be it,” he said.

The hotel had no guests in August, Mandani said, even though the month is usually high season. “The worst part is everyone who made a reservation now wants to cancel, and we have to refund that money. With the park closed, it’s going to be really bad.”

Local officials are navigating the tension between providing full disclosure about conditions affecting safety and health while enticing tourists to come back.

Corless, who represents the Eastern Sierra on the Sierra Nevada Conservancy’s board, said local officials need to tap into the love visitors have for the region to foster a sense of stewardship to help communities recover.

“We need to create a stronger constituency for the Sierra Nevada throughout the state,” she said. “People might say during a fire, ‘I’ve got a condo in Lake Tahoe or Mammoth, what a bummer, I can’t go up there.’  We need more. We’ve got to somehow connect tourism with activism and the need to address the state of our forests.”

The study found that visitors who were informed about the role of prescribed burns to help diminish fire danger were supportive, even with the accompanying flames and smoke. Fires to reduce fuel loads in forests were suspended in March because of the coronavirus.

While fires are obstacles, researchers found that the public safety power shutoffs in 2019 were the leading reason for tourists to cancel trips that year, said Jackson Wilson, an associate professor who studies tourism at San Francisco State University.

“There was a strong distaste for the power outages,” said Wilson, who was one of the report’s  authors.

Providing timely and accurate fire information is critical in an area that attracts visitors from outside the state who may not be familiar with fire protocols. Those visitors are highly prized, the study found, because they stay longer and spend more than state residents, many of whom visit the Sierra on day trips.

Carl Ribaudo, a travel-industry consultant who was one of the report’s authors, said their interviews found that state residents “have gotten quite savvy about reprogramming their trips. They will reprogram to another place in the Sierra or reprogram to the coast, but then they will be back. It’s a very fluid market. Technology has enabled residents to look at conditions and make better decisions.”

But Ribaudo added that visitors unfamiliar with the geography of a region may not have a good sense of where fires are burning.

“Someone sitting in New York may say, ‘Oh my god, the western United States is on fire!’ Someone in the Bay Area will just plan for another weekend,” he said.