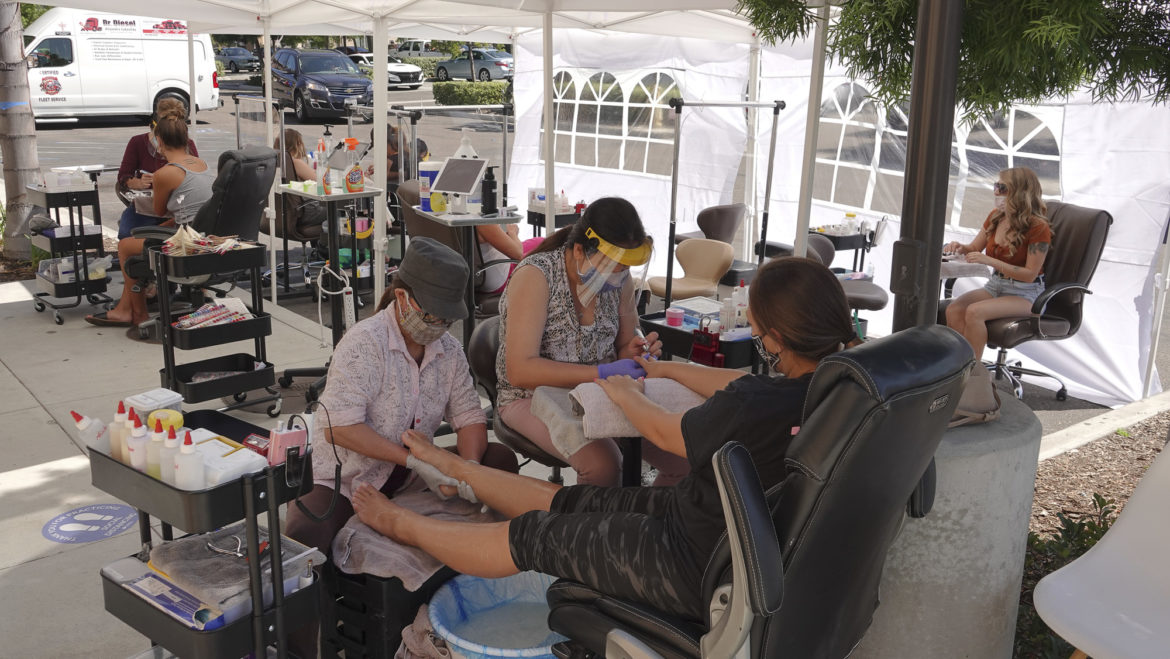 As California experiences a decline in test positivity and fewer hospitalizations, the state is easing restrictions on nail salons. And health officials say test results are now much quicker.

A bit of good news for Californians who have been putting off their mani-pedis because of the pandemic: the state will relax restrictions on nail salons and allow them to resume indoor operations with some modifications, the state’s top health official said today.

Dr. Mark Ghaly, the state’s health and human services secretary, said during a press briefing that an examination of how nail salons can make indoor operations safer led to the decision. The state is allowing nail salons to resume services inside even in counties in the most restrictive “purple” tier — a designation for widespread virus transmission — in California’s reopening blueprint.

Beauty industry representatives say this is the result of advocacy and education done right.

“I don’t think Dr. Ghaly would have made this announcement today if it wasn’t for our pressure, not just political pressure, but also education,” said Fred Jones, attorney and lobbyist for the Professional Beauty Federation of California.

Until Ghaly’s announcement today, nail salons in counties with high transmission of coronavirus were only allowed to conduct business outdoors. While not ideal because of the summer heat wave and wildfire smoke, many salon owners did open up shop outside, usually in parking lots and under tents.

In late August, when the governor first announced the state’s new blueprint to reopen the economy, he also announced that hair salons would be allowed to welcome clients indoors, but left out nail salons. Estheticians were not included in today’s announcement.

The state is seeing a continuous decline in test positivity and hospital admissions linked to COVID-19. Statewide, hospitalizations are down to numbers reported in early April, before the summer peak. The state has also adopted a slower, phased-in reopening strategy that contrasts with its all open-or-shut approach from the spring that was followed by a wave of cases and crowded hospitals. Under this new plan, counties fall in one of four colored tiers, based on case rate and test positivity.

In today’s call with reporters, Ghaly said the fact that case and hospital trends are down while some business sectors have reopened is a good sign that this new approach is working better. But he said he will save “final judgment” until the state has more data following Labor Day weekend.

The state also has reported significant improvements in testing availability and quicker test results. After months of delayed test results, with some Californians reporting waiting two weeks or more to hear back, now about 90% of test results are coming in under 48 hours, said Dr. Erica Pan, the state’s acting health officer.

Ghaly said the state is updating its testing guidelines, so that all people— regardless of symptoms— can get a test. Previously, because of a high demand for testing and shortage of testing supplies, the state had recommended that health providers prioritize coronavirus tests for high-risk individuals, people with symptoms and essential workers.

“Those efforts across counties big and small are indeed making the kind of difference in the data that we’re seeing now,” he said.

Ghaly also announced that five counties— Alameda, Riverside, San Luis Obispo, San Mateo and Solano counties— will move from the most restrictive “purple” tier for widespread virus transmission, to the red tier. This allows those counties to reopen more non-essential businesses or have less restrictions on already operating businesses.

El Dorado, Lassen and Nevada counties are now in the “orange” tier for moderate virus transmission, and Mariposa County will be allowed to reopen most indoor operations under its new “yellow” tier designation for minimal transmission.

No counties moved backward. San Diego County, which had asked state officials to exclude their cases tied to outbreaks at San Diego State University, will remain in the red tier with a 6.9 adjusted case rate. Staying in the red tier, for example, allows San Diego restaurants to continue dine-in services at 25% capacity. Had the county surpassed the 7.0 case rate threshold, it would have had to close restaurants’ indoor operations.

Gov. Gavin Newsom made clear last week that counties with outbreaks in colleges will not see any special modifications because college students are also part of a greater, outside community.