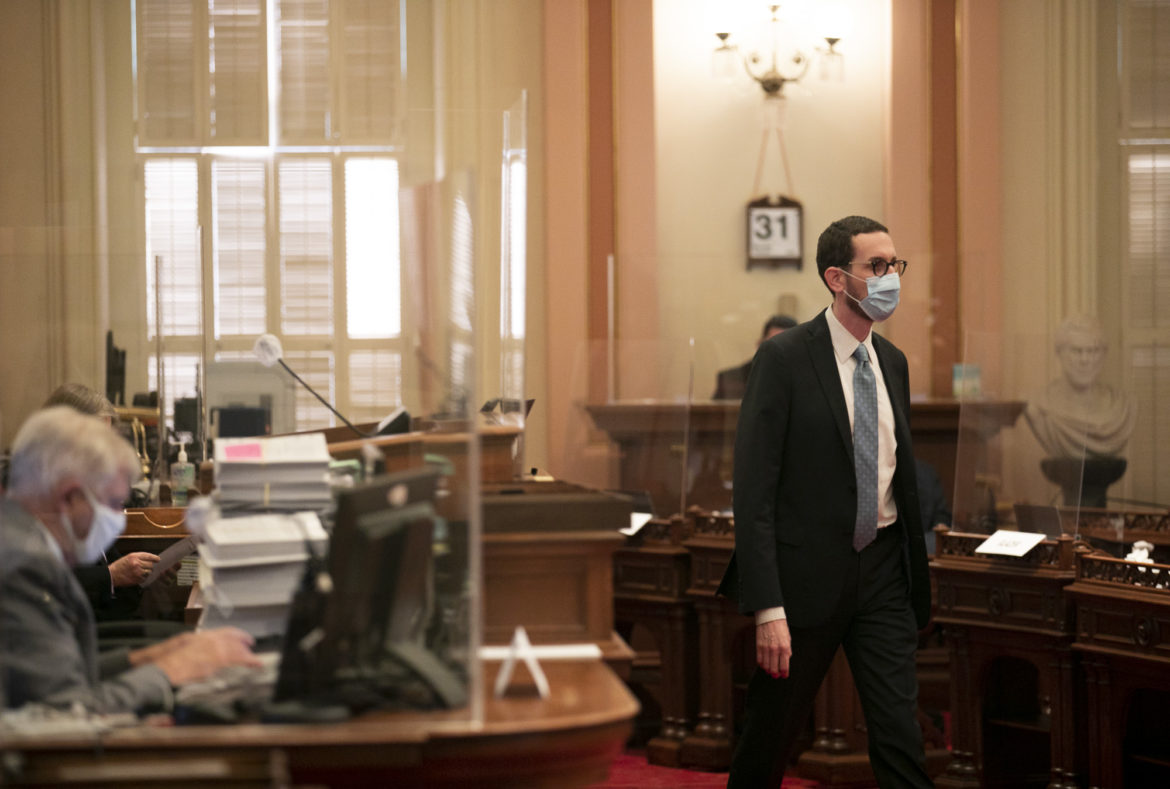 Sen. Scott Wiener on the Senate floor on the last day of the legislative session on Aug. 31, 2020. Photo by Anne Wernikoff for CalMatters

For over a year a bill — signed into California law this month — that gives judges discretion over whether or not to require someone convicted of statutory rape to register as a sex offender, has been at the center of a storm of viral misinformation.

Now it’s become an issue in a handful of congressional, legislative and municipal races across the state.

What the bill, authored by San Francisco Democratic state Sen. Scott Wiener, did not do was alter any of the existing penalties for sexual assault, rape or child exploitation. But many critics of the new policy — including Donald Trump Jr. and Texas Sen. Ted Cruz — have put forward a very different description of the law: It enables child abuse.

Note that the explanation of what the law actually does requires four bullet points of history, context and nuance. The incendiary mischaracterization only took four words.

That may present a challenge for the new law’s defenders. So far the National Republican Congressional Committee, the chair of the state GOP and even adherents of the outlandish conspiracy theory QAnon have used the bill as a cudgel to beat their Democratic opponents.

Assemblymember Todd Gloria, who is in a tight race to become San Diego’s next mayor, was slammed by the conservative TV outlet KUSI News for supporting “lower penalties for sex with minors.”

The chair of the San Diego GOP Tony Krvaric hopped on, reminding his followers that Gloria “was the deciding vote” on “this vile legislation.” (The bill passed out of the Assembly with the slimmest of margins, 41 votes, making every “yes” vote the “deciding vote.”)

Gloria’s opponent in the mayor race, a fellow Democrat, sided with the Republicans vowing that, as a mother, she would not have supported the bill.

This weekend, in an online political convention sponsored by Chino Hills evangelical pastor Jack Hibbs, Sen. Melissa Melendez from Temecula said in a speech that Wiener’s attempt to set a common standard that would “be fair for everyone” was a laudable goal.

Despite that allowance, Melendez said the law is part of a “leftist agenda” decades in the making to “normalize pedophilia.”

“I hope you write to your legislator and ask them, ‘‘how did you vote on this bill?’” she said, speaking to the camera. “And if they tell you they didn’t vote at all, they abstained from voting, make sure you let them know what a coward they are.”

That last barb appeared to be directed as Assemblymember Christy Smith, who recently came under fire for not explicitly voting against the bill.

In a Facebook exchange, Smith, who is hoping to unseat Republican Congress member Mike Garcia in Simi Valley, was put on defense when Garcia’s supporters asked her how she voted.

“I did not vote in support of that bill,” Smith wrote.

When another commenter retorted that Smith, like 11 other Assembly Democrats and two Republicans, did not vote on the bill at all, Smith responded, “in the CA Legislature ‘not voting’ counts as a no.”

That’s true. A bill only passes in California if it exceeds the required threshold for “yes” votes. Refraining from voting is a common maneuver by legislators who don’t want to support a bill, but who may not want to stick their finger in a colleague’s eye or alienate a bloc of constituents by out-and-out opposing it.

Even so, National Republican Congressional Committee spokesperson Torunn Sinclair blasted out an email with a screenshot of the exchange. “This is not a joke. Christy Smith said this. It’s on Facebook,” Sinclair wrote, before noting that, as a technical recordkeeping matter, “no vote recorded” are counted separately from “no” votes. “Christy Smith is a pathological liar,” she added.

Christopher Raahauge, who is running against moderate Democratic Assemblymember Sabrina Cervantes, had a similar take on his opponent’s “no vote recorded” on the bill.

“If Sabrina Cervantes was against SB145, which endangers our children, she would have voted against it,” he wrote on Facebook.

Wiener’s bill is only the latest California law to gain traction among right-leaning activists, media outlets and social media personalities seeking to confirm that Democratic governance in California is just as depraved as their followers believe it to be.

The 2017 version: a law that prevented the arrest of child sex trafficking victims on prostitution charges, instead treating the children as victims rather than criminals. The false version, trumpeted most prominently by then-GOP Assemblymember Travis Allen: “California Democrats legalize child prostitution.” (They did not.)

This isn’t even the first time that Wiener’s bill has been the subject of an election controversy.

But the attempt to weaponize the bill backfired.

The LGBTQ rights organization Equality California called the ad “thinly veiled” homophobic attack against Democratic Assemblymember Susan Eggman, who is a lesbian and who hadn’t even taken a formal position on the bill. Some lawmakers and the Asian and Pacific Islander Legislative Caucus pulled their endorsements of Grewal in response.

He didn’t end up making it past the primary. But Eggman did. And when Wiener’s bill came up for a floor vote in the Assembly last month, she abstained.