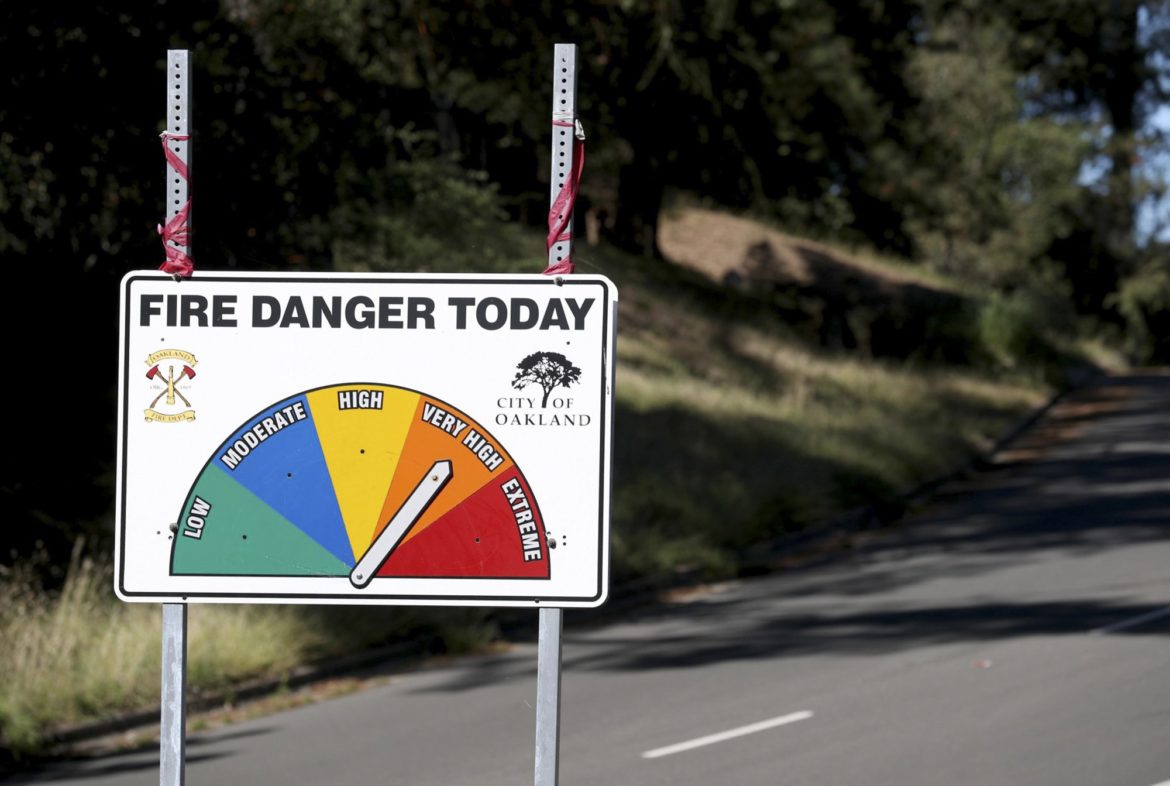 Another big heat wave is set to blanket California this weekend — bringing with it gusty winds, increased fire risk, unhealthy air quality and potential power shutoffs even as Californians reel from what is already the worst fire season in recorded history.

Temperatures could spike to 10 to 20 degrees above normal throughout the state, and much of Northern California will remain under a fire weather watch through Monday due to strong winds and low humidity, state fire officials said Thursday. Meanwhile, PG&E warned it may shut off power to customers in the northern Sierras and Sacramento Valley region to reduce fire risk.

The early-autumn heat wave follows a summer defined by two record-breaking heat waves, the first rolling power outages in nearly two decades, and powerful winds that exacerbated historic fires and caused more power shutoffs. It also comes as more than 18,200 firefighters are stretched thin across 26 major wildfires — including five of the six largest in California history.

Gov. Gavin Newsom has doubled down on climate change. On Thursday, he signed a suite of environmental protection bills — including one that mandates CRV plastic bottles be made with 50% recycled materials by 2030 — and launched a new program called the California Climate Action Corps. On Wednesday, he directed state officials to ban the sale of new gas-powered cars starting in 2035 and asked lawmakers to ban new fracking permits by 2024. Several plan to introduce a bill to do so next session.

About three in four Californians say wildfires pose a greater threat than ever before, with 90% percent of Democrats saying climate change is a major factor, compared to 19% of Republicans, according to a Thursday poll from UC Berkeley’s Institute of Governmental Studies.

In his latest “big, hairy, audacious” move, Newsom wants to ban the sale of gas-powered cars in California. Will President Trump use this to bash California and the Biden-Harris ticket? He’s almost certain to try, writes CalMatters’ Ben Christopher.

1. Feinstein in the spotlight

California Sen. Dianne Feinstein is in the hot seat. She will lead the Democrats’ attempt to block Republicans from appointing President Donald Trump’s nominee to the Supreme Court, despite concerns that she may be incapable of doing so due to her age. And on Thursday, her husband, Richard Blum, was identified as the regent who helped an unqualified student gain admission to UC Berkeley following a scathing state audit into unfair admissions practices at the University of California. Blum sent an “inappropriate letter of support” to the UC Berkeley chancellor in support of a student with a 26% chance of getting off the waitlist, who was later admitted, the state auditor said.

Protests swept across California Wednesday and Thursday nights following a Kentucky grand jury’s decision not to charge any police officer directly in the March killing of Breonna Taylor. Protests in Los Angeles, San Francisco, Oakland, Sacramento and other California cities followed a summer of demonstrations against police brutality and racism galvanized by the May death of George Floyd, federal agents’ July intervention in Portland, Ore. protests, and the August shooting of Jacob Blake, among others. Although both Newsom and state lawmakers promised to enact ambitious police reforms in the wake of the protests, many stalled in the final days of the legislative session in August.

As elementary schools across California apply for waivers to resume in-person learning, a picture of disparity is emerging: More than 500 private schools have had waivers approved, representing at least 25% of the state’s K-6 private-school enrollment. But only around 120 public-school campuses have reopened, accounting for about 1.6% of K-6 public-school enrollment, CalMatters’ Ricardo Cano reports. The reopening requirements generally pose less challenges for private schools, many of which don’t have teachers unions and only have to get buy-in from smaller subsets of the community. The imbalance between private and public schools could begin to shift as more counties move into less restrictive tiers, though some districts remain hesitant to return to in-person instruction.

Tombstone Territory, a small rural community in Fresno County, doesn’t have drinkable water — despite the fact that Newsom visited Tombstone more than a year ago to establish a fund of $1.4 billion over 10 years to tackle the state’s clean water crisis, the Fresno Bee reports. The situation underscores the convoluted and lengthy process of bringing clean water to a community, including tangled local politics, the rigamarole of government approval and funding challenges. Though Tombstone submitted a funding application to the state in June, the review process is expected to last another six months — meaning the project is unlikely to reach completion before 2023.