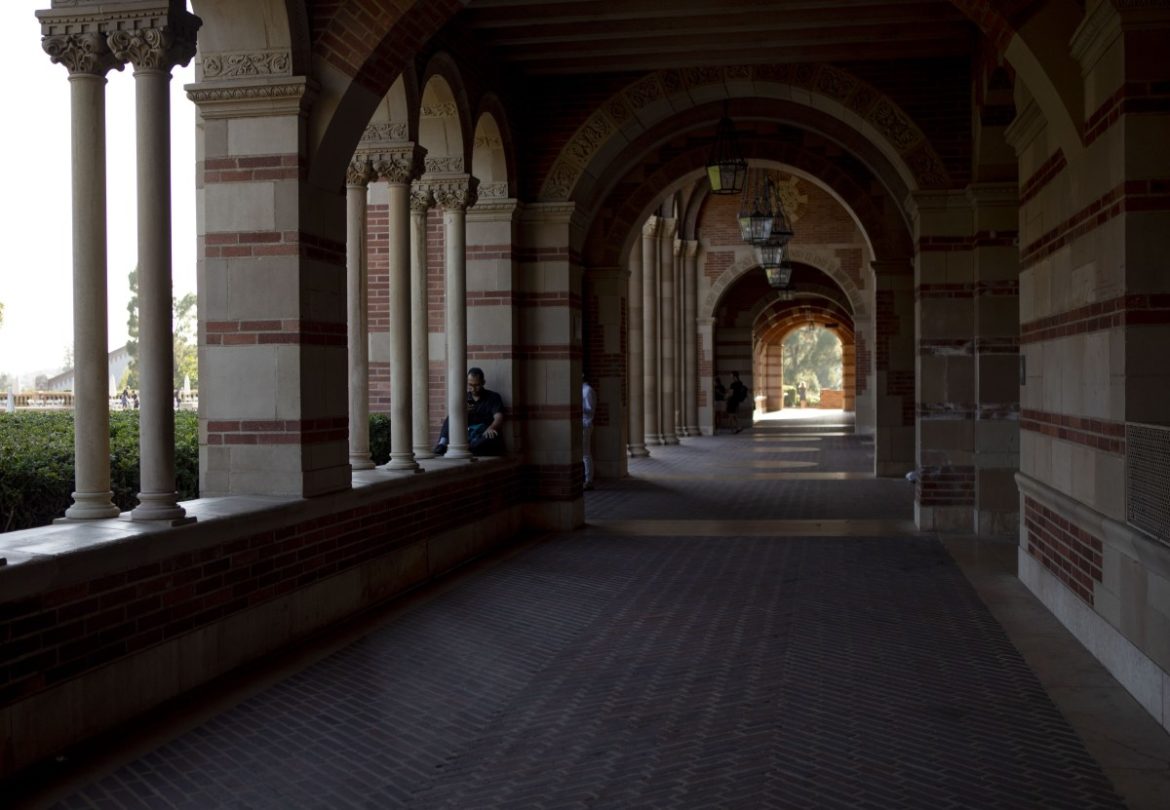 Royce Hall at UCLA on August 7, 2019. Photo by Anne Wernikoff for CalMatters

The pandemic situation at UC campuses, and its attendant precautions, is likely to persist until at least fall 2021, a UC health expert says.

Zoom classes will need to stick around for at least another year at the University of California, according to the system’s top health official.

Dr. Carrie L. Byington, executive vice president of the sprawling UC Health system, said Wednesday that COVID-19’s impact on public health will require the university to continue its modifications, which include almost all classes done virtually and extremely reduced on-campus housing capacity,  through September of 2021, improving gradually each month through July of 2022.

Byington’s remarks came at the UC Board of Regents meeting during a virtual meeting.

After a regent asked if it’s the case that January won’t look much different than the situation on campuses today and that the picture won’t change much by September, Byington said “that is an accurate summary of my feelings.”

“I do think that we will not be back to normal by January, and that we need to plan now for what the winter quarter or winter semester looks like,” she said. Byington also pointed out that the positivity rate for coronavirus cases among young people has risen significantly since the start of the pandemic.

It’s the strongest indication that the UC could join the California State University in remaining largely online for the remainder of the academic year. Last week Cal State Chancellor Timothy P. White said the system of more than 480,000 students would stay its mostly virtual course. “This decision is the only responsible one available to us at this time,” he wrote in a public letter.

California has taken a far more conservative approach to re-opening than other states. “COVID-19 will be with us for a long time and we need to adapt,” said Gavin Newsom in an Aug. 28 press briefing.

Byington echoed those sentiments, channeling historical precedent. “This is not something that will go away quickly,” she said. “The pandemic of 1918, which is the one that we would compare this to most easily, (it) was about four years before things began to really change.”

The slow timeline to returning to normalcy makes sense. A widely distributed vaccine won’t be available until the middle of next year at the soonest, said the director of the federal Centers for Disease Control and Prevention at a Congressional hearing Wednesday.

Researchers are testing 40 possible vaccines for the virus, but not one has been approved for full use, according to a New York Times tracker. Former tech mogul and world health philanthropist Bill Gates, speaking at an event for the Bill and Melinda Gates Foundation, estimated people’s lives would not return to normal until 2022.

Adding to the confusion is that the UC and many other health experts have disagreed with federal guidance on how to handle the coronavirus. While the CDC recommended against widespread testing of college campus students, “our subject matter experts believe that that was incorrect,” Byington said. Campuses are testing their returning students at the start of the term and plan to test a portion of students throughout the fall, she said. Few CSU campuses are doing the same.

Most UC campuses are in parts of the state that are the most exposed to the coronavirus. Last month Newsom presented a color-coded map of California based on the severity of the virus. The new metrics will guide the state’s plans for allowing more in-person activity. A purple color is the most severe, indicating more than 7 new cases daily per 100,000 people and a positivity rate above 8%.

“For the majority of our campus communities and our medical centers, we remain in the widespread purple category,” Byington said, citing data from Sept. 1.

Winter remains a concern for her. “We think that the COVID positivity rate and number of cases will increase in the winter,” she said. “More people come inside and they feel like they don’t want to be so isolated, they want to be with friends and family.”