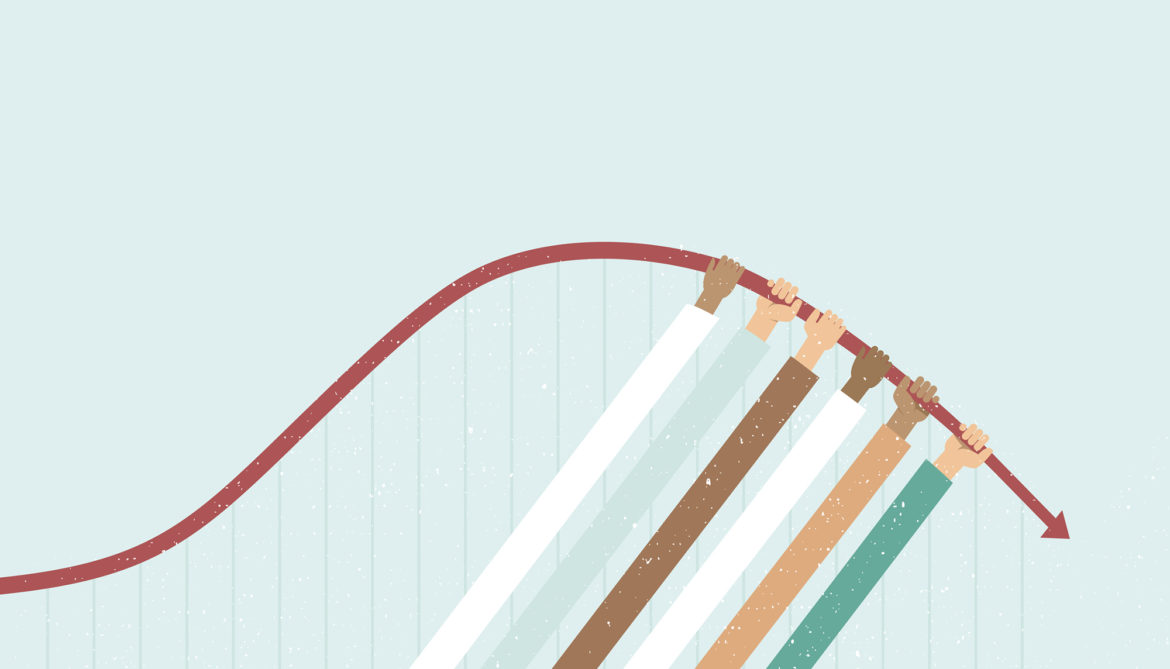 We can do it together. Flatten the curve concept for COVID-19 disease outbreak. Health care workers, police, government  and all the people stop spreading viral infection.

Amid record-breaking fires, apocalyptic orange skies and smoke-choked air, Californians finally have a bright spot of news: Coronavirus positivity rates statewide fell to an all-time low of 3.6% over the past 14 days and 3.3% over the past week.

As a result, travelers from California no longer have to quarantine for two weeks upon arriving in New York, New Jersey or Connecticut, the three states announced Tuesday.

The welcoming news comes as hospitalizations and intensive-care admissions have fallen 61% and 56%, respectively, from their peak in mid-July, CalMatters’ tracker shows. It also comes as eight counties showed enough progress in containing the virus to move from the state’s purple tier to the red tier since the new system governing business and school reopenings was introduced three weeks ago, California Health and Human Services Secretary Mark Ghaly said Tuesday.

Thirty counties are now in the most restrictive purple tier, 17 in the red tier, 9 in the orange tier and 2 in the least restrictive yellow tier. Next week, counties in the red and orange tiers will be eligible to move down a tier for the first time, allowing them to reopen more businesses, Ghaly said.

Meanwhile, the California Fitness Alliance, a group of nearly 300 businesses, sued Gov. Gavin Newsom and Los Angeles County on Tuesday over the reopening guidelines, which they argue unfairly target gyms. More than 30 lawsuits have been filed against Newsom’s shelter-in-place order.

Every election season has its ups and downs — now this one has acrosses as well. Put your expertise to the test with this crossword puzzle from CalMatters’ Ben Christopher.

And if the clues are giving you trouble, check out our voter guide and Gimme Props game.

California has the highest poverty rate in the United States when adjusted for cost of living, clocking in at 17.2%, according to the U.S. Census Bureau’s 2019 Supplemental Poverty Measure report released Tuesday. That translates to about 6.7 million Californians living in poverty, a slight improvement from 2018, when the Census Bureau found that 7.1 million Californians, or 18.1%, were living in poverty. Nevertheless, the Golden State has consistently led all other states in adjusted poverty rate since the Census Bureau began the data series in 2011, according to the California Business Roundtable. (Several times, the District of Columbia has topped California.)

For more on poverty and income inequality in California, check out CalMatters’ California Divide series.

Democratic vice-presidential candidate Kamala Harris joined Newsom in her home state Tuesday for a briefing on the wildfires that have charred more than 3.2 million acres, killed 25 and destroyed more than 4,200 structures. Harris emphasized the role of climate change in California’s historic fire season, implicitly slamming Republican President Donald Trump for his Monday comments during a visit to the Golden State.

The California state auditor will begin an emergency audit of the beleaguered unemployment department by the end of September, Assemblymember Rudy Salas, chair of the Joint Legislative Audit Committee, announced Tuesday. The audit will focus on the department’s backlogged claims and workload, as well as its call center capacity and actions taken to improve response times. The audit will also assess the department’s tech infrastructure — a key goal of the strike team Newsom formed July 29, which he said would “deliver a roadmap” of solutions within 45 days. Though it’s been more than 45 days, a roadmap has not yet been shared publicly.

When it comes to Prop. 16, the November ballot measure that asks voters whether they want to lift California’s ban on affirmative action, both the supporting and opposing campaigns are trying to make their case by throwing around a lot of different statistics — some of which seem contradictory, and many of which may confuse voters. CalMatters’ Mikhail Zinshteyn breaks down where these numbers actually come from and puts them in context. He also examines what affirmative action in California public universities and colleges might look like, noting that it wouldn’t involve quotas, which are illegal, and would consider race and ethnicity “in the most limited manner possible to achieve compelling goals,” like a diverse student body.