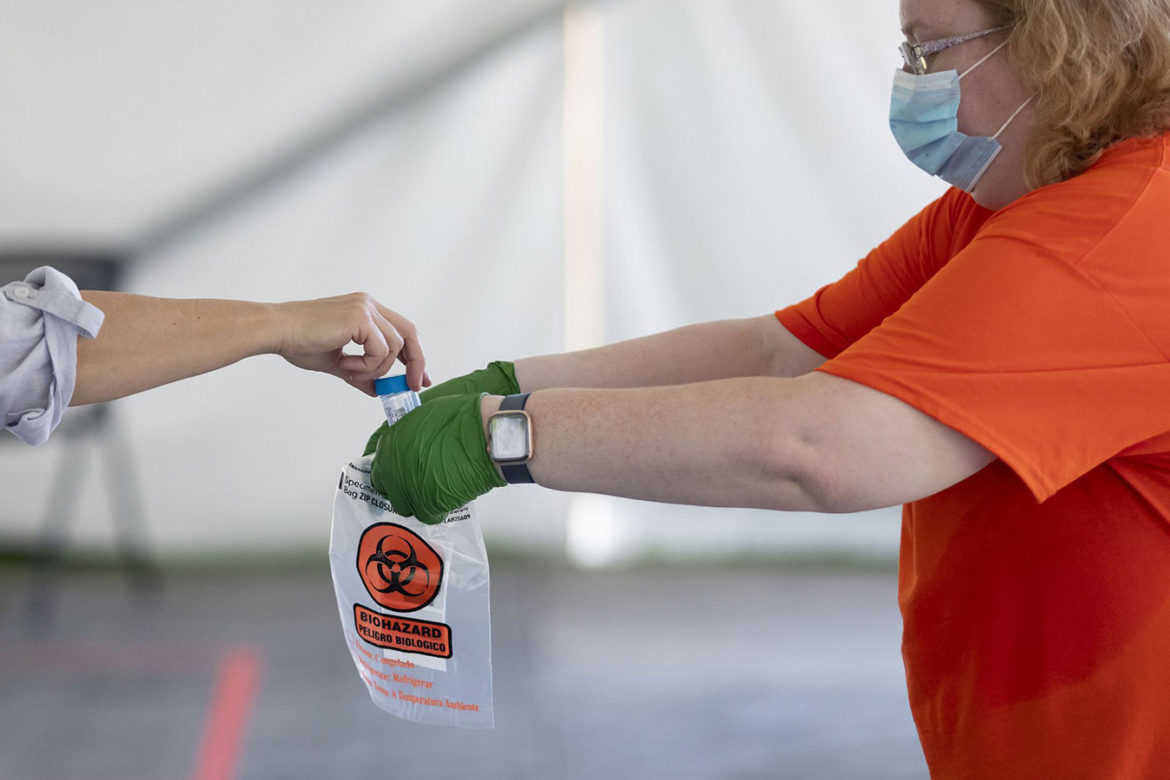 A COVID-19 saliva sample is collected as testing is conducted on July 7, 2020, in a tent on the University of Illinois at Urbana-Champaign campus. (Brian Cassella/Chicago Tribune/Tribune News Service via Getty Images)

Reopening colleges drove a coronavirus surge of about 3,000 new cases a day in the United States, according to a draft study released Tuesday.

The study, done jointly by researchers at the University of North Carolina-Greensboro, Indiana University, the University of Washington and Davidson College, tracked cellphone data and matched it to reopening schedules at 1,400 schools, along with county infection rates.

“Our study was looking to see whether we could observe increases both in movement and in case count — so case reports in counties and all over the U.S.,” said Ana Bento, an infectious disease expert and assistant professor at Indiana University’s School of Public Health.

“Then we tried to understand if these were different in counties where, of course, there were universities or colleges, and particularly, to see if these increases were larger in magnitude in colleges with face-to-face instruction primarily,” she said.

Nearly 900 of those schools opened primarily with in-person classes, according to the draft study.

The research examines the period from July 15 to Sept. 13. It does not name specific institutions or locations, but researchers found a correlation between schools that attempted in-person instruction and greater disease transmission rates.

Just reopening a university added 1.7 new infections per day per 100,000 people in a county, and teaching classes in person was associated with a 2.4 daily case rise, the study found.

“No such increase is observed in counties with no colleges, closed colleges or those that opened primarily online,” the study says.

Factoring in whether students came from places where disease incidence was high added 1.2 daily cases per 100,000 people.

Daily new case counts nationwide during the study period ranged from a high of 70,000 to a low of 30,000, according to data compiled by The New York Times.

The authors are not calling it a mistake for colleges to have opened, considering the many variables each school faced. But earlier reporting on reopening plans around the country found a welter of chaotic efforts that did not conform to a single standard, suggesting the potential for disaster when students returned.

In fact, numerous reports surfaced around the country showing frightening COVID spikes in college towns, often blamed on partying by students. Even at the University of Illinois, a school lauded for its preparations and robust testing, more than 2,000 cases have been reported on campus since students went back last month. Cases there peaked about a week after classes began and have fallen since then.

The authors are not faulting irresponsible young people, either, since they studied class instruction methods, not behavior off campus, where some students have acted extremely poorly.

“I think that it’s slightly unfair, perhaps, to say, ‘Oh, students are congregating and creating these bad behaviors that lead to outbreaks,’” Bento said. “I think it’s more this idea of when you see a huge influx from all over the country, or from different counties, into a college town that we know had a very low burden of COVID throughout the first months, all of a sudden we have this increased probability of infection, because we have a large community of individuals that were susceptible still.”

Rather than lay blame, she said, the idea of the study was to measure the problem and then use that data to better figure out how to respond, which is the subject of a future study.

“In order for you to open online, hybrid or meet face to face, there needs to be a different combination of strategies that allows you to catch [cases] early so you’re able to control community spread, which is the biggest problem here,” Bento said.

The researchers hope to have that work done relatively soon, well before colleges start spring semesters.

There are some unanswered questions, such as how much of the surge in cases is simply from sick students testing positive when they arrive versus catching COVID-19 after they arrive — and how much students spread the virus to the community or the other way around.

Another is how well specific types of responses mitigated the spread, and whether different local safety measures helped or hurt.

And there is an alarming caveat: The work almost certainly did not capture the full extent of the campus-linked surge.

“While this study estimates around a 3,000 increase in daily cases, we have to take into account that this is actually likely an underestimate, because we still don’t see” people who are asymptomatic, Bento said.