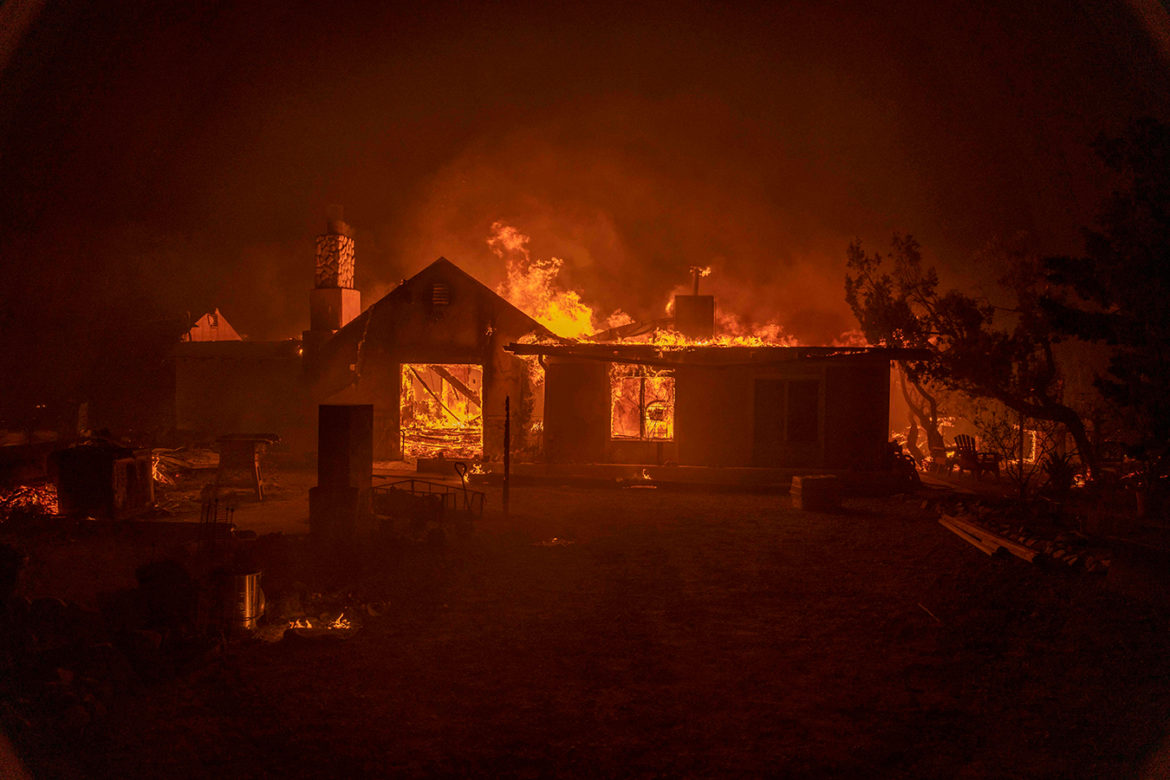 A home in Juniper Hills, California burns during the Bobcat Fire. (Photo by Kyle Grillot/AFP via Getty Images)

For the past month, record-breaking wildfires have torched millions of acres from the Mexican border well into Canada, their smoke producing air so toxic that millions of people remained indoors for days on end while many visited hospitals because of respiratory distress.

Last week, Hurricane Sally left a trail of watery devastation in Mississippi, Alabama and the Florida Panhandle, even as more storms brewed offshore.

All of that on top of the COVID-19 pandemic, which has killed nearly 1 million people worldwide.

The timing couldn’t have been better for the opening this month of the Center for Healthy Climate Solutions at UCLA’s Fielding School of Public Health.

Its mission is to work with policymakers and community groups to help safeguard human health against the ravages of climate change. The center was founded on the premise that the long-feared effects of climate change are already here and must be met with policies not only to slow the warming of the planet but also to help people adapt to its reality.

The center’s co-directors, Dr. Jonathan Fielding and Michael Jerrett, believe the clock is running out and we must quickly reduce the amount of carbon being pumped into the atmosphere to have any hope of preserving a viable planet.

“A lot of the predictions of what could happen with climate change have been wrong. But the predictions have been wrong in that they haven’t been catastrophic enough,” Fielding, a professor of medicine and public health at UCLA and former head of the Los Angeles County Department of Public Health, said in an interview last week.

Jerrett, a professor of environmental health sciences at UCLA’s Fielding School who also participated in the interview, is the principal investigator on a study hypothesizing that long-term exposure to air pollution elevates the risk of severe COVID-19 outcomes. Other studies have yielded similar findings.

The following excerpts of the interview with Fielding and Jerrett were edited for length and clarity:

Q: Could the hazardous air quality from the wildfires burning across much of the West Coast fuel an increase in severe COVID-19 cases and deaths?

Jonathan Fielding: There’s a very good chance of that. There is no doubt the effects of air pollution on the lungs and other organs are substantial and contribute to people with chronic problems being more susceptible to the severe effects of COVID.

Michael Jerrett: When we have wildfire events like this, as people are exposed to these high levels of smoke, we see increases in those indicators of morbidity and mortality. And we’ve seen those effects for several lung diseases that have similarities to COVID, like pneumonia.

Q: How does climate change exacerbate the racial, ethnic and socioeconomic health disparities that are so prevalent in our society?

Fielding: You already have people who have a higher rate and burden of chronic illness. Just look at the rates of obesity, for example, as well as the rate of cardiovascular disease. Those are certainly exacerbated by increased heat and by where people can afford to live. A lot of people can only afford a place that’s going to have a lot of heat islands, it’s not going to be air-conditioned, it might not have much in the way even of public transportation.

Jerrett: If you look through very long periods of time, people who have more resources — whether that’s better social contacts or they’re more highly educated, or have higher incomes, or other factors that put them at a social advantage — have always been able to protect themselves from environmental risks better than people who lack those resources.

Q: Can you explain how wildfires affect mental health?

Jerrett: There’s emerging and increasingly convincing literature that shows air pollution is related to anxiety and depression. It’s thought that the change in the nervous system that seems to be stimulated by air pollution, and perhaps the vascular system changes, can affect brain function and lead people into a more depressive state. … Secondly, the loss of immediate surroundings that people are familiar with: So if you are used to looking out and seeing a beautiful forest, and you walk out and you look in your backyard and you see nothing but smoke, and the whole forest is gone, that can affect mental health.

Q: Can we expect to see pandemics more frequently?

Fielding: What I think most people are missing in discussing this issue is population growth. We’re increasing the interface between humans and other species that have viruses that may not affect them but very severely affect humans. So, that’s one issue. The second issue is that climate change is increasing the area where you have vectors that can thrive. So, for example, we’re going to wind up with mosquitoes that can transmit dengue fever and malaria in the U.S.

Q: You talk about the “health co-benefits” of programs that can help slow climate change while mitigating its impact on public health. What are some examples?

Jerrett: Some of the leading practices in terms of generating benefits involve, say, increasing the green cover. As we increase green cover, we absorb more carbon, so we’re going to reduce the risk of long-term climate change, but you can also have substantial health benefits from that. We know that the introduction of more vegetation generally lowers extreme heat, particularly in disadvantaged neighborhoods where they don’t have a lot of park space or a lot of trees. Another leading practice, where the Europeans are way ahead of us — but we do see signs of improvement across California, in places like Santa Monica — is promoting what’s known as active travel: to get people out of their cars and get them on a bicycle or walking for incidental trips or going to work. We get a benefit in terms of their increased physical activity, and we also reduce the amount of emissions.

Q: Are the climate changes we are already seeing permanent, or can they be halted or even reversed?

Jerrett: We’re already in what I would call a climate crisis. It’s elevating to a climate catastrophe, and that’s going to happen in the next 20 years. We still have a chance to pull back. If we don’t, then we’re going to start seeing massive species die-offs; it’s going to affect the ability of people all over the world to feed themselves. We’re going to have these extraordinary, extreme events like wildfires that are going to dwarf what we’ve seen in the past, and large portions of the planet may become uninhabitable.

Fielding: Here I would draw a parallel to COVID. Even though many of us predicted a pandemic, most people didn’t really believe it, the government didn’t prepare well for it, and we’re learning the same thing with climate change. The difference is we have a way, through vaccination and maybe drugs, to reverse what’s going on with COVID. We don’t know that we have the ability to do that with climate change. You have people politicizing it and calling it a hoax, and that, unfortunately, is very detrimental to what we all want, which is to have a habitable planet.