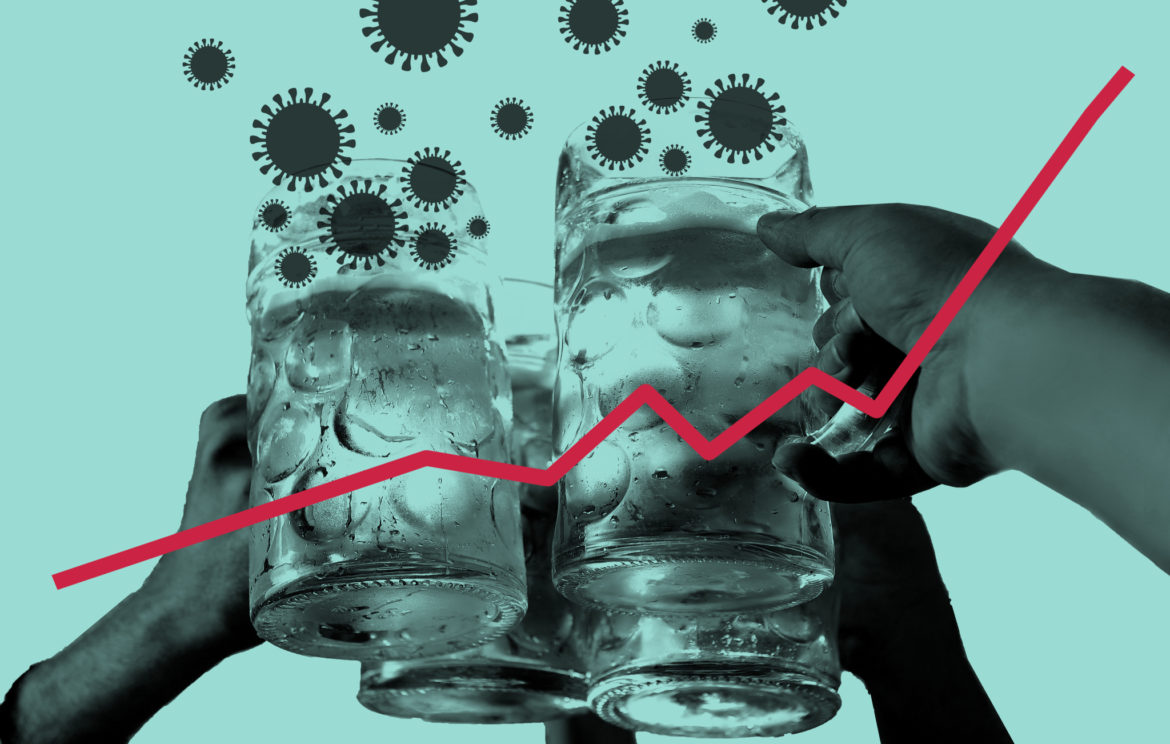 [UPDATE: Officials in Texas and Florida announced Friday they were closing bars in those states to help contain the spread of the coronavirus. Texas Gov. Greg Abbott said that taverns there could continue to provide delivery and takeout services if authorized by liquor board officials. In Florida, Halsey Beshears, secretary of the Department of Business and Professional Regulation, reported the suspension of bar service in a tweet but gave no other details.]

As states ease their lockdowns, bars are emerging as fertile breeding grounds for the coronavirus. They create a risky cocktail of tight quarters, young adults unbowed by the fear of illness and, in some instances, proprietors who don’t enforce crowd limits and social distancing rules.

Public health authorities have identified bars as the locus of outbreaks in Louisiana, Florida, Wyoming and Idaho. Last weekend, the Texas alcohol licensing board suspended the liquor licenses of 17 bars after undercover agents observed crowds flouting emergency rules that required patrons to keep a safe distance from one another and limit tavern occupancy.

Adriana Megas found HandleBar Houston so crowded when she went one night two weekends ago that she left. “They weren’t counting who came in and came out,” said Megas, 38, a nursing student. “Nobody was wearing any masks. You would never think COVID happened.”

The owners of HandleBar Houston, one of the bars whose licenses were suspended, did not respond to requests for comment. Megas said she and her friends drove by five other jammed bars on their way home. “The street was insanely busy,” she said. “Every single bar was filled.” 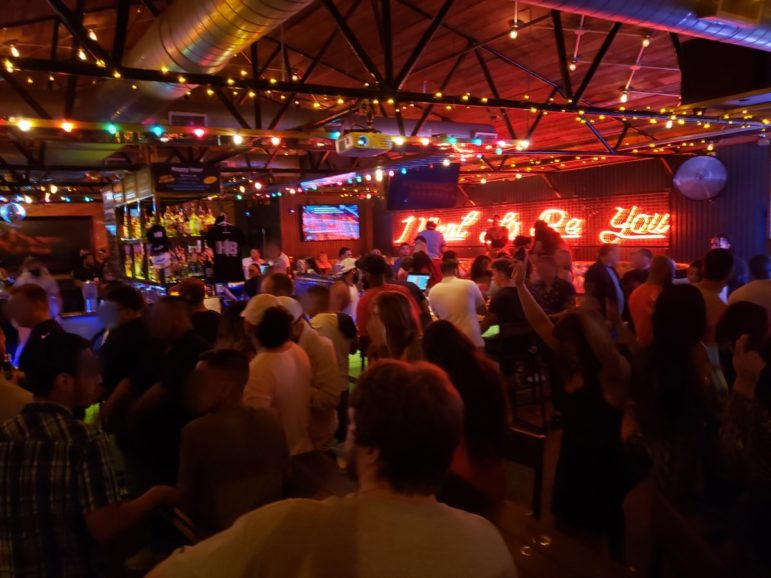 In Boise, Idaho, at least 152 people have been diagnosed with COVID-19 in cases that health authorities linked to people who, unaware they were infectious, visited bars and nightclubs, officials said. On Monday, the Central Health District, which oversees four counties, rolled back its reopening rules to shutter bars and nightclubs in Boise’s Ada County.

Bars are tailor-made for the spread of the virus, with loud music and a cacophony of conversations that require raised voices. The alcohol can impede judgment about diligently following rules meant to prevent contagion.

“People almost don’t want to social-distance if they go to the bar,” said Dr. Amesh Adalja, a senior scholar at the Johns Hopkins University Center for Health Security in Baltimore. “They’re going to be drinking alcohol, which is a social lubricant. People will often be loud, and if they have forceful speech, that’s going to create more droplets.”

On top of that, the very act of drinking is incompatible with wearing a mask, a primary way of limiting the spread of infection. Public health experts say many patrons are young adults who may think they are impervious to the coronavirus.

It’s certainly less lethal for them: Fewer than 4% of adults in their 20s with COVID-19 have been hospitalized, compared with 22% of those in their 60s, according to the federal Centers for Disease Control and Prevention. Only 1 in 1,000 COVID-19 patients in their 20s die from the virus.

Nonetheless, as bars and other public places reopen, rates of infection in younger adults are rising, and bars are a particularly dangerous vector. Several outbreaks have been traced to bars that cater to college students. In Baton Rouge, Louisiana, health authorities have received reports of more than 100 instances of positive COVID-19 tests tied to bar visits and bar employees in Tigerland, a neighborhood frequented by Louisiana State University students.

Reggie Chatman, a 23-year-old LSU graduate and sports reporter at a Baton Rouge television station, said he was surprised at how crowded the Tigerland bars were when he drove past them last weekend.

“It looked like a football weekend. It was unbelievable, just seeing that many people walking around,” he said. “Each bar had a line in front of it. It didn’t look like they were really stopping anybody from going inside. I didn’t see one mask out there at all.”

Jason Nay, the general manager of Fred’s, one of the bars there, said the bar closed two days last week to test all employees after three workers were COVID-positive. The business reopened Friday night but had only five customers.

“This goes to show you how many people know what’s going on,” he said. “Not even the students who thought they were invincible felt comfortable coming out.” He said that Fred’s will check patrons’ temperatures and hand out disposable face masks this weekend.

Nay, 37, said he believed most students had been actively socializing for months by having friends over to their homes. “Don’t think they changed anything until recently, and I think the main reason why they changed is because their parents really tore into them because they could have brought that home for Father’s Day,” he said.

There are about 43,000 bars in the country. As many states permit them to reopen, authorities have enacted various measures to mitigate the chances of infection. Earlier this month, Florida Gov. Ron DeSantis allowed bars to open at half capacity with social distancing. This week he warned that violators risk losing their liquor licenses if “it’s just like mayhem and like ‘Dance Party USA’ and it’s packed to the rafters.”

In Texas, Gov. Greg Abbott decreed that bars must limit indoor service to half their legal occupancy, keep tables to 10 people or fewer and enforce 6 feet of distancing between groups. “There are certain counties where a majority of the people who are tested positive in that county are under the age of 30, and this typically results from people going to bars,” Abbott said at a press conference earlier this month.

Last weekend, undercover inspectors with the Texas Alcoholic Beverage Commission visited nearly 600 bars and restaurants in Texas’ major urban areas. The commission posted on Twitter videotapes of two bar scenes and a photograph of a third bar, all showing patrons standing shoulder to shoulder and chatting face-to-face. Those bars and 14 others had their liquor permits suspended for 30 days, with the threat of a 60-day suspension for a repeat violation.

On its Facebook page, one of the bars sanctioned by the commission, BARge 295 in Seabrook, near Houston, said its license was suspended “for allowing some customers to stand and gather at the bar [S]aturday night (no six foot rule).” The bar, which has been promoting its live music, whole pig roasts and a bikini contest, said it would appeal the action.

“Everyone in the country is aware of the situation and has the ability to think for themselves and decide when and where they want to interact socially,” the bar said in a series of posts. “This BS needs to end now. Come out and support local businesses.”

Other bar owners have found the mandates manageable. Greg Barrineau, who owns a number of bars in the San Antonio area, said he rearranged tables and stools to meet the state’s requirements. “The guidelines are not that hard to follow,” he said. While the state does not require masks, he said the county’s administrative officer and the mayor decided to fine businesses if customers did not wear masks, and most patrons have complied.

“You walk in the door, and you sit down and take your mask off,” Barrineau said, adding he was not sure how big a difference it makes. “If they were waiting in the line outside and the restroom, then they would wear them.”

J.C. Diaz, president of the American Nightlife Association, which represents bars and clubs, said it has been harder for bars to enforce mask-wearing because it has been so politicized. “The problem now is people are not adhering to the mitigation measures,” he said. “We’re doing what we can do to prevent the spread of COVID, but if you are a reckless guest who doesn’t care about the health of others, you shouldn’t be out.”

Masks alone cannot solve the problem, said Dr. Ray Niaura, interim chair of the epidemiology department at New York University’s School of Global Public Health. The risk of contagion is impossible to eliminate at bars, especially since many infected people are asymptomatic. “Even if you distance tables, you’re still going to have groups of people together,” he said.

Megas, the nursing student, said crowds have not deterred her from planning to return to Houston bars despite the continued spread of the coronavirus. “I’ve studied it enough and I think it’s been going on long enough that I’m really comfortable around it,” she said. “There’s a small part of me that is just like ‘I would like to get it now, while I’m not in school.’”