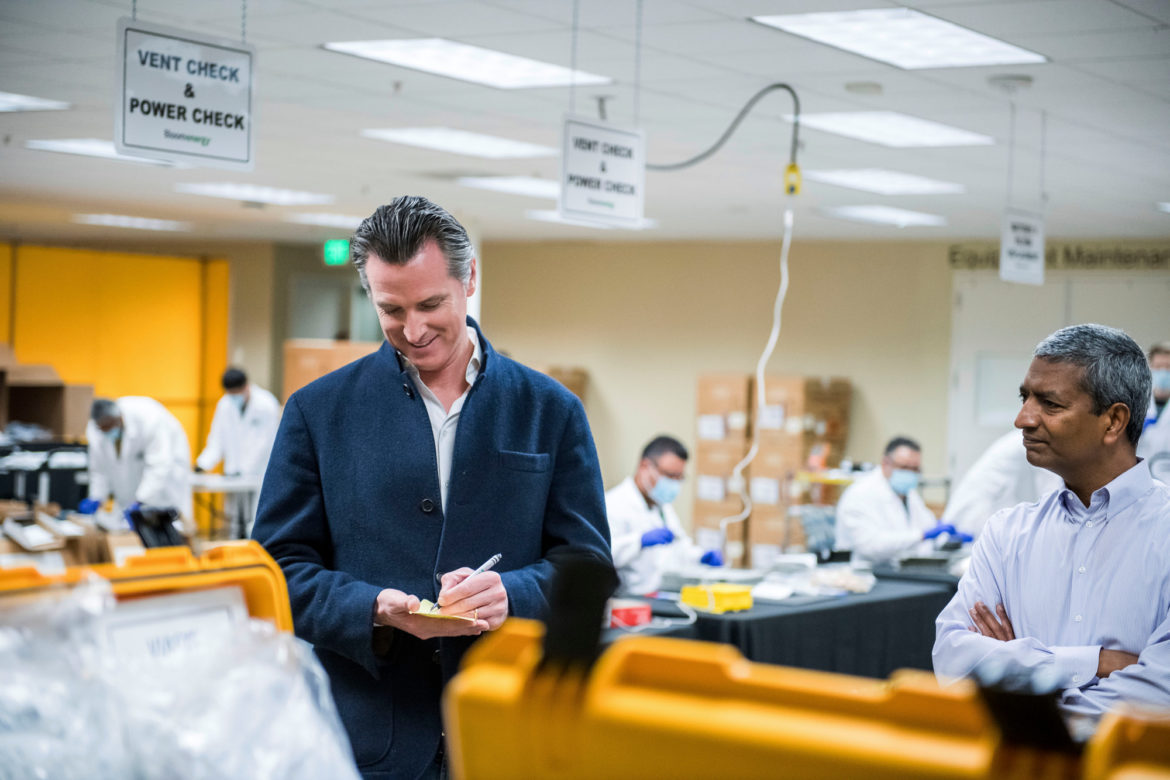 In this March 28, 2020, file photo, Bloom Energy CEO KR Sridhar, right, watches as California Gov. Gavin Newsom writes down a note during a tour with Sridhar of the Bloom Energy Sunnyvale, Calif., campus. Bloom Energy is a fuel cell generator company that has switched over to refurbishing ventilators as an increasing number of patients experience respiratory issues as a result of COVID-19. Gov. Newsom announced Monday, April 6, 2020, the state would loan 500 ventilators to the national stockpile for use by New York and other states experiencing a crush of coronavirus-related hospitalizations. (Beth LaBerge/Pool Photo via AP, File)

That’s the message that Gov. Gavin Newsom has been sending to the rest of the country over the last week. For those short on ventilators, the Golden State will share its mechanical bounty, sending hundreds to New York, New Jersey and Illinois, ferried by California’s uniformed National Guard.

For those who lack protective masks, California — as per an announcement he made on MSNBC’s Rachel Maddow show last night — will be amassing 200 million per month. Enough to meet the state’s needs. And maybe your state’s too.

“We need to coordinate and organize our nation-state status as we can, only in California with our procurement capacity that is quite literally second only to the United States,” the governor told reporters this afternoon. California would act as “a catalyst to increase supply” not only for the state’s health care workers, but for those in other states and perhaps other countries “across the globe.”

“That’s how we perceive our role.”

“This is not political, this is not in any way, shape or form usurping or undermining, this is all in the spirit of all of us stepping into this moment and doing what we can,” he said in response to a question from CalMatters. “California is just uniquely resourced.”

In another crisis or under a different president, that’s a role one might expect of the White House. After spending the first weeks after the novel coronavirus made landfall in the United States downplaying its severity, President Donald Trump has since taken a rather hands-off approach when it comes to providing necessary supplies, coordinating purchases of protective equipment or using national emergency powers to force manufacturers to produce more of it.

“Try getting it yourselves,” the president advised state governors in a conference call in mid-March, a decentralized approach that former Maryland Gov. Martin O’Malley described as “a Darwinian approach to federalism.”

“We’re returning to the Articles of Confederation where the federal government is just there for war and printing money,” she said. “It’s the local and state governments — the governors — that are moving into the vacuum and creating the leadership and exercising the power in this crisis.”

For at least a decade, political focus and news coverage has been increasingly nationalized, with governorships, once a predictable stepping stone to the White House, fading from public view, she said. No longer.

On daytime television, “they are interrupting even the soap operas at noon to carry Newsom live,” she said. “I’ve never seen that!”

In that respect, Newsom still can’t compete with the star power of New York Gov.  Andrew Cuomo. Chief executive of the state that has been hardest hit by the pandemic — and which is home to some of the country’s most prominent television and print news — Cuomo’s widely televised daily briefings have earned him a degree of national trust that seems to rival the president’s.

According to a Monmouth University poll conducted in the first week of April, 23% of respondents named Cuomo as the public official they trust most to deal with the pandemic. 20% put their trust in Trump. Only 3% named Newsom.

That may change now that Newsom is suggesting he could come to the rescue of some other states if California has spares from its equipment bounty. It’s yet another way that California’s governor has distinguished himself from his counterparts in other states. Newsom was the first to call for a statewide shelter-in-place order, issuing the edict days before Washington, New York and Louisiana and weeks before Arizona and Florida. In the weeks since, there are faint signs that California may escape the worst ravages of the virus — though it’s still too early to say whether Newsom and local leaders can take credit.

“Showing the world what makes our state great”

Another contrast in leadership styles: Amid a coronavirus outbreak aboard the Grand Princess cruise ship, Newsom coordinated with Oakland Mayor Libby Schaaf and the Trump administration to offload and quarantine the passengers in the Bay Area. He praised Schaaf and other local elected leaders for “showing the world what makes our state great — coming to the rescue of thousands of people trapped aboard this ship and helping tackle a national emergency.”

In Florida, where cruise ships loaded with sick passengers await disembarkation, Gov. Rob DeSantis said the state would only accept the Floridians.

In announcing his new plan this afternoon, Newsom evoked his Jesuit education.

“The Bible teaches us we are many parts, but one body,” he said. “Father Coz was my econ teacher at Santa Clara University and he began every single lecture by reminding us of our web of mutuality.”

Not everyone has applauded Newsom’s generosity. With hundreds of California ventilators lent out to other states in need, Riverside County Supervisor Kevin Jeffries, a former Republican legislator, told The Los Angeles Times that he worried whether regional hospitals would “be able to get the assistance that we’re going to need in a week or two weeks out.”

For now, plans to produce hundreds of millions of new masks and potentially provide them to other states remains a hypothetical.

Newsom said that a number of governors had welcomed his plan to mass-purchase equipment and share California’s excess “because they understand we are helping increase supply, we are not taking away a limited number of supplies.”

Newsom’s office has not yet responded to the question of which other states he was referring to.

Tara Lee, a spokesperson for Washington Democratic Gov. Jay Inslee, said in a statement that “Governor Newsom has expressed his hope that the California procurement system will soon be in a sufficiently strong position that they could share some of the opportunities with other states, and Gov. Inslee looks forward to discussing that.”

Despite their past Twitter cage-matches, Newsom, a progressive Democrat, has been uncharacteristically friendly with the Republican president since the beginning of the pandemic. Now he regularly praises his former political nemesis. Any criticisms of the federal government have been indirect, sandwiched between compliments.

“We have received just over 1 million (medical masks) from the federal government,” Newsom told Maddow last night. “It’s not an indictment. It’s not a cheap shot. At the end of the day they don’t have the masks at the national stockpile.”

“I can’t say I’m ashamed of the governor,” she said. “Overall I give the governor an ‘A’ in terms of his tone and his suspending of the normal partisan attacks on the president.”

She does not even begrudge him trying to glean a political advantage as he leads the “nation-state” of California through this crisis.

“When you look at him offering aid to other states, I think that’s American, that’s neighborly. But clearly every politician is looking at the next job,” she said. “I think he’s gunning for president — as is Andrew Cuomo.”

But while Newsom’s decision to begin sending aid to other states and coordinating purchases could be seen as his strongest critique of the president’s leadership style, other governors have been blunter.

“It’s like being on eBay with 50 other states bidding on a ventilator,” New York Democratic Gov. Andrew Cuomo complained a week later. “The federal government, FEMA, should have been the purchasing agent, buy everything and then allocate it by need to the states.”

Even medical equipment manufacturers have asked the federal government to tell them what to do.

In a letter to FEMA, Scott Whitaker, president of the Advanced Medical Technology Association industry group, wrote that “it is difficult for manufacturers to establish these priorities” and requested the Trump administrator’s leadership and advice “in deciding how to allocate these products in the most effective way” and to “designate a lead agency, such as FEMA, to oversee these allocation decisions.”

Trump: “We’re not a shipping clerk”

But so far Trump has been clear that he does not see his role as purchaser-in-chief. “We’re not a shipping clerk,” he said in mid-March. When a reporter asked him last week about the inefficiency of states outbidding one another for desperately needed personal protective equipment, the president said that it was up to each governor to “work that out.”

He also blamed the states for lack of preparation.

“They waited,” he said. “They didn’t want to spend the money because they thought this would never happen. And their shelves, in some cases, were bare.”

That tactic has been applauded by some conservative commentators, who see in Trump’s restraint the wisdom of the founding fathers.

“This is of course exactly the way federalism is supposed to work,” wrote John Daniel Davidson, political editor at the Federalist. “We should expect the government power that’s closest to affected communities to be the most active, while Washington, D.C., concern itself with larger problems, like developing a vaccine and controlling our borders and ports of entry.”

The U.S. Constitution makes state and local leaders the first deciders in a pandemic, said Laura Kahn, a doctor and public health researcher at Princeton, and the author of Who’s in Charge?: Leadership during Epidemics, Bioterror Attacks, and Other Public Health Crises.

But Trump’s reluctance to help coordinate the various states’ policies and plans has been unique — and uniquely troubling, she said.

“That’s really unprecedented having the president pit one state against the other…We’re supposed to be the United States helping each other out, not survival of the fittest,” she said. “Given that we don’t have a federal government to coordinate this, these times call for the leadership of the states to step up.”

Coronavirus in California by the numbers