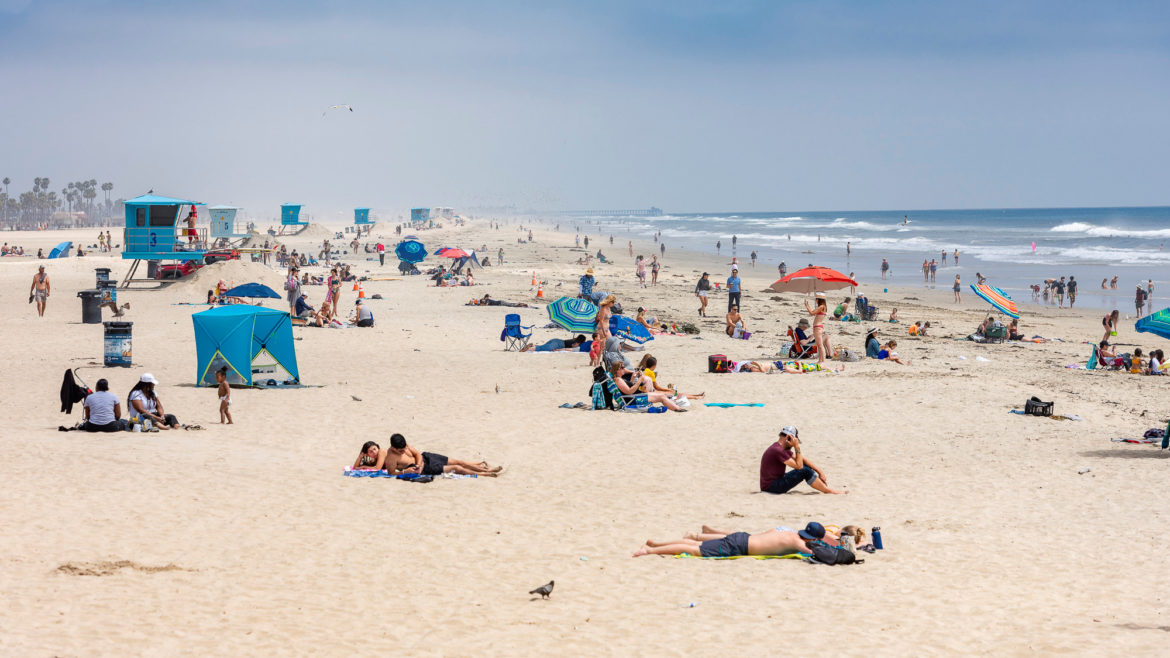 Beach goers enjoy the sun and sand near the Huntington Beach Pier in Huntington Beach on Thursday, April 30, 2020, the day before Gov. Gavin Newsom is expected to order all beaches and state parks closed due to concerns over the coronavirus pandemic. (Photo by Leonard Ortiz, Orange County Register/SCNG)

As reports that Gov. Gavin Newsom planned to close all California beaches whipped around the state on Wednesday evening, local officials pushed back. From the foggy north end of the state to the sun-soaked south, several said closing every beach on the state’s 800-mile coastline would be a draconian way to try to stem the spread of the coronavirus. The Humboldt County Sheriff went so far as to say he wouldn’t enforce such an order.

In the end, Newsom didn’t do it — and given that those reports were based on a memo from a police chiefs’ association, it’s unclear now if that’s ever what he planned. Instead, the governor today announced a limited closure affecting only Orange County, the region that drew national attention last weekend for beaches packed with visitors despite government orders for people to stay at home due to the pandemic.

And within hours, the move drew a vote by city officials in Huntington Beach — which has often been at odds with the Democratic governor — to fight Newsom’s order in court. Dana Point reportedly followed suit, and Newport Beach officials released a statement saying they would meet this weekend “to discuss legal options to challenge the directive.”

“People that are congregating there that weren’t practicing physical distancing… may go back to their community outside of Orange County, and may not even know that they’ve contracted the disease,” Newsom said during his daily press briefing. “Now they put other people at risk, put our hospital system at risk.”

The decision illustrates the difficult deliberations Newsom will have to make over the coming months as he decides how much to reopen the state and how much to defer to local officials. His decision to target Orange County likely satisfied coastal communities in other parts of the state, although parking lots at state beaches elsewhere remain closed, making it difficult to visit them.

Nonetheless today’s action amounted to a more heavy-handed move than Newsom has used during most of the coronavirus emergency. As he ramped up to the mandatory order to stay home on March 19, he issued a series of edicts that were basically suggestions. Even after he issued the nation’s first stay-at-home order, Newsom repeatedly downplayed the likelihood of strict enforcement, saying social pressure would lead Californians to do the right thing.

So it was little surprise that officials in Orange County reacted with anger after Newsom brought the hammer down.

Huntington Beach’s Republican mayor, Lyn Semeta, calleld Newsom’s mandate “a jarring decision” in a statement tonight promising a legal challenge.  “Given that Orange County has among the lowest per-capita COVID-19 death rates in California, the action by the State prioritizes politics over data, in direct contradiction of the Governor’s stated goal to allow science and facts to guide our response to this horrible global pandemic.”

Her city and the Newsom administration already have battled over California’s “sanctuary state” law and Huntington Beach’s lack of housing construction. The coronavirus has sparked but the latest episode in their feud.

“Six weeks into this shelter-in-place order, the beach may be the best medicine,” said a statement from GOP state Sen. John Moorlach of Costa Mesa. “We need to trust people. If our citizens exercise proper social distancing, then we should allow access to the beaches.”

Democrats in the county packed with swing districts tried to walk a line between echoing the frustration of their beach-loving constituents and having the back of California’s Democratic governor.

“Orange County’s pristine beaches are more than tourist attractions — they are essential public spaces, like parks, that residents should be allowed to utilize safely,” Democratic Rep. Harley Rouda of Newport Beach said in a statement.

“Unfortunately, this discussion has become political and polarizing with two extremes defining the debate — reopen everything immediately or continue the lockdown without an end in sight…  I firmly believe there is a way to use common sense to find common ground.”

Assemblywoman Cottie Petrie-Norris, a Democrat from Laguna Beach, said she is working with local officials to try to reopen as soon as possible in a way that ensures safety: “As we move forward, we must be led by science and facts, not by politics and not by fear.”

The hospitalization rate for people with confirmed COVID-19 is continuing to rise in Orange County, according to a CalMatters analysis of state data. As of today, among all California counties, it has the eighth highest per-capita rate of people hospitalized with the disease.

“I recognize that many Southern Californians will be very disappointed with the decision,” Padilla wrote in a statement. “Our coast is a precious resource for all of us but today we should remember what’s most precious — life itself and the health of our communities.”

Still, with weather warming and children out of school, many people are eager to get out. Newsom acknowledged that a lack of clear direction from the state combined with a patchwork of local ordinances has left many Californians confused about what kinds of outdoor activities are permitted. So the state updated its COVID-19 website with more information to address common questions, he said.

“People ask about being able to play catch with your kids, kick a soccer ball around, those kinds of activities. Yes, they are appropriate as long as you’re practicing physical distancing,” Newsom said, adding that about 200 state parks remain partially open.

“I want you to see the sunset. We want you to enjoy… activities outdoors. Only thing we don’t want you to do is linger outdoors in ways where you’re mixing, you’re congregating, or you’re violating the principles we set out on our stay at home order related to large events.”

The risk of transmitting the novel coronavirus increases anywhere crowds are congregating — which is why it’s critical for people to continue social distancing, and to consider masks in higher traffic places, said Angela Rasmussen, a virologist at the Columbia University Mailman School of Public Health.

But there’s still a lot that scientists don’t know about transmission or persistence of the virus outdoors, she said.

“In general the risk is pretty low, provided physical distancing is maintained,” Rasmussen said in an email to CalMatters. “Sunlight inactivates the virus, and temperature and humidity can also likely impact how long the virus can persist on a surface and remain infectious.”

But even in the sun, experts like Rasmussen recommend that people keep their distance. While ultraviolet light can inactivate the virus, it doesn’t work instantaneously — or in the shade, said Michael Buchmeier, a professor at the University of California, Irvine who studies viral infections.

So packing people close together on a beach is still risky. “They’re breathing air that is recently expelled by someone else, and sunlight — even sunlight — takes a little bit of time,”  Buchmeier said. “You have the potential always in a group that someone is going to have an undiagnosed or a pre-symptomatic case of infection, and that they may in fact be spreading to others.”

Other coastal states have also grappled with how much to restrict beach access during the pandemic. After enduring stinging criticism for images of wall-to-wall revelers crowding Florida beaches during Spring Break, Gov. Ron DeSantis allowed counties to decide how to manage beaches and parks. That led to confusion, officials said.

Sarasota County, for example, began to allow limited recreational access to its beaches but closed the parking lots, in part, to prevent residents of other areas flocking to the open beaches. According to county spokesman Drew Winchester, residents for the most part self-policed themselves to ensure social distancing was maintained and no one was allowed to sit on the beach.

But DeSantis this week announced that most of the state’s beaches would reopen on Monday, saying he wanted to take “baby steps” to reopen vital parts of the state’s economy.

That means that beaches will open, but many concessions, playgrounds and other amenities may not, Winchester said. And beachgoers may not congregate in groups larger than 10 people. The order excludes Miami-Dade, Broward and Palm Beach counties, where the majority of Florida’s coronavirus cases have occurred.

California’s state beaches vary greatly, from the small and isolated rocky coves of Mendocino County to the bustling volleyball and basketball courts of Huntington Beach, where iconic lifeguard towers dot the sand.

And many of California’s state parks are not beaches at all, but inland open spaces where long hiking, horseback riding and mountain biking trails crisscross forests, grasslands and mountains. Only about a quarter of California’s 280 state parks and beaches are totally shuttered, but with parking lots closed at all of them, the only options at many are to hike or ride in.

Health experts say the key to minimizing the spread of virus is to avoid crowds, whether it’s on beaches or hiking trails. Buchmeier, the UC Irvine professor, compared seeing a person approaching on a narrow trail to seeing a bear: “Just consider that person a bear, you know, a dangerous bear coming down the trail — and maybe you’d better give it a little room.”

Gov. Gavin Newsom says the state appears to be flattening the curve. We unravel the response to the coronavirus outbreak and look at what lies ahead.