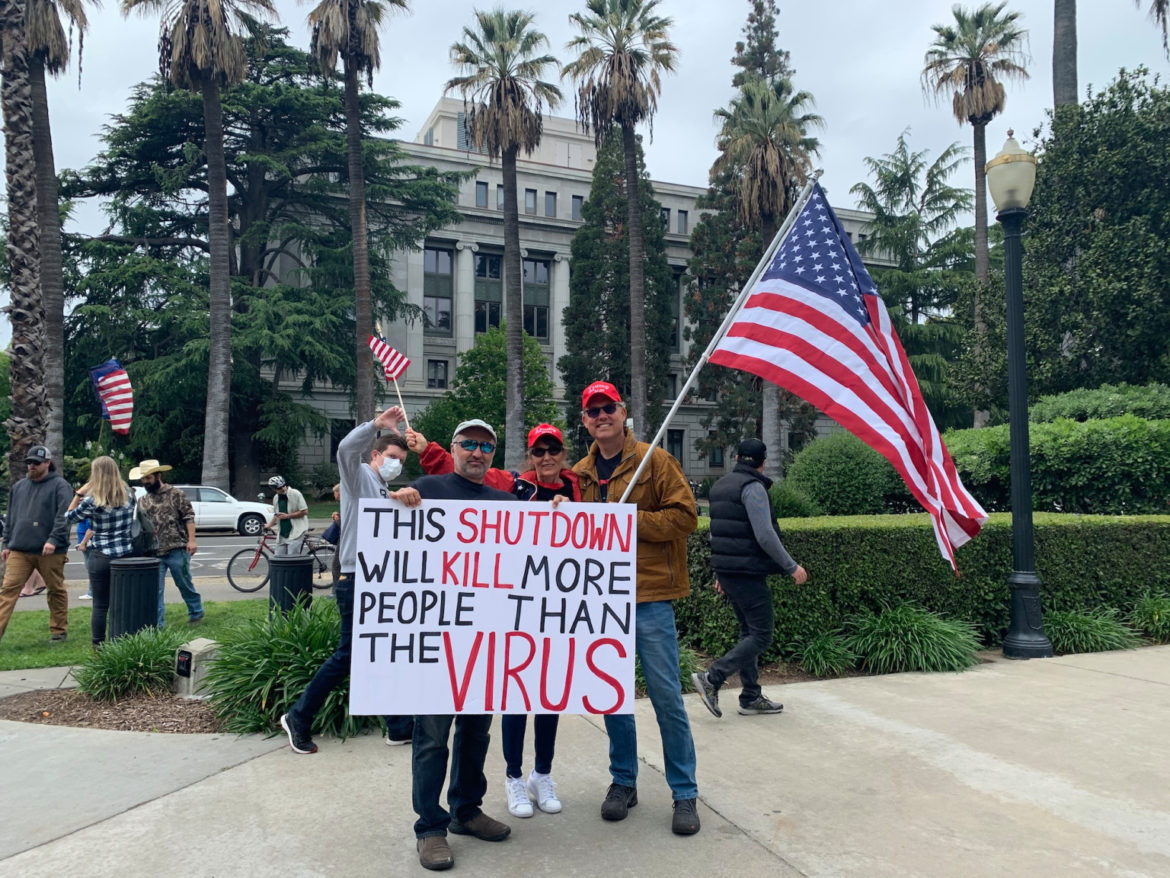 Demonstrators filled the sidewalk and part of 10th Street in Sacramento during the "Operation Gridlock" stay-at-home protest at the Capitol Monday, April 20, 2020. Photo by Andrew Nixon, CapRadio

Californians pushed back at Gov. Gavin Newsom’s handling of the coronavirus pandemic on Monday, with protesters demanding that stay-at-home restrictions be eased and state lawmakers arguing for more transparency and a bigger role in decisions.

The action at the Capitol — staid inside an Assembly hearing room, rowdy on the streets outside — followed a weekend of similar demonstrations around the country and mounting frustration from some California cities and counties that want to resume some sense of normalcy five weeks after Newsom issued the nation’s first order for everyone to stay home to prevent the spread of the coronavirus. Protests erupted in San Diego, San Clemente, Newport Beach, and Huntington Beach while Ventura County began to ease restrictions and numerous communities — including the Sierra foothills town of Placerville and the coastal county of San Luis Obispo — pleaded with Newsom to allow businesses to reopen.

“Our freedoms are being stripped,” said Natalie Hutchison, 55, one of the protestors outside the Capitol.

Demonstrators largely flouted public health recommendations to wear face masks in public and keep six feet of personal space. They waved American flags and hoisted signs saying “Open California now,” “This shutdown will kill more people than the virus,” “Let us work,” and “Fear God, not COVID-19.” Many marched around the Capitol on foot, while others formed a convoy of honking cars.

Hutchison — who said she heard about the protest on social media and brought her family with her from Manteca to attend — said she thinks people who are immunocompromised should stay home, but everyone else should be able to go out. She opposes vaccines — despite widespread medical consensus that they have helped rid society of many brutal illnesses — and said she instead believes “in a God-given immune system.”

The protest was organized by Freedom Angels, an activist group that last year opposed a new California law that makes it more difficult for people to exempt their children from mandatory vaccines. The group tried to put a referendum on the ballot to overturn the law but failed to gather enough signatures.

Rick Turner, Monday’s public information officer for the California Highway Patrol’s Capitol Protection Section, said the CHP issued a permit for the protest with the understanding it would follow the state’s public health guidance.

“This is not what occurred today, so the CHP will take this experience into account when considering permits for this or any other group,” Turner said.

Officers were on the scene in large numbers, but the protest was peaceful, and no arrests or citations were made, Turner said. Only some officers wore face masks, and Turner said CHP recommends but does not require officers to wear face masks.

The scene was very different inside the Capitol, where nine Assembly members gathered in a large hearing room to examine how Newsom’s administration has spent money on California’s response to the coronavirus. About half of them covered their faces with masks, and all spoke into microphones topped with protective covers.

Though the tone was cordial, three themes emerged as areas where lawmakers feel irritated that Newsom has left them out of the loop:

“We often, as legislators, hear maybe five minutes before an executive order comes out, or watching live the governor’s daily updates to get information,” said Assemblyman Jim Wood, a Democrat from Healdsburg.

“That’s a challenge,” he said, adding that he often doesn’t have the necessary information to pass onto local officials in his community.

Fellow Democrat, Assemblyman Adam Gray of Merced, said he still hasn’t received information he requested from Newsom’s aides about where emergency medical supplies and protective gear are being distributed.

Assemblyman Phil Ting pressed Newsom’s aides about the state’s plan to test more Californians for the coronavirus — to no avail.

The response from Marko Mijic, acting director of the Office of Statewide Health Planning and Development:

“We are assessing that right now. I don’t have the exact number for you.”

But they didn’t expect — nor did they permit — the governor to spend pandemic money on social safety net programs, Obernolte said, noting that the law specifically says lawmakers want to address the social impacts of the virus through the budget process.

Newsom’s response to the pandemic has included $75 million in taxpayer funds to aid undocumented immigrants and $42 million for foster youth, among other items that some might see as tangential to the emergency response.

“We, the Legislature, would like to partner with the governor in addressing the social impacts of COVID through the budget process,” Obernolte said. “So I feel like the Legislature has been bypassed on this issue.”

Newsom made national news nearly two weeks ago when he announced a $1.4 billion deal to buy protective gear for essential workers, including a $990 million contract for hundreds of millions of face masks made by a Chinese company called BYD.

Legislators were immediately frustrated that they got little heads-up about the enormous expenditure, and requested more information from Newsom’s administration. The governor still has not released the contract, and his director of emergency services said Monday it won’t be released until the goods arrive in California because global demand for the equipment has made it very valuable.

“Releasing the contract at this point, we believe, jeopardizes the delivery of the very supplies we need now,” said Mark Ghilarducci. “We are close to getting that flow of commodity in, and we do plan to release the contract as a matter of course when we believe it no longer jeopardizes actually receiving the (personal protective equipment).”

Ghilarducci said California did not seek bids from multiple companies when it turned to BYD. He wouldn’t say how much the state agreed to pay for each mask but assured lawmakers it was a fair price.

GOP Assemblyman Bill Brough of Dana Point didn’t seem persuaded, and said he was disappointed that Newsom didn’t turn to manufacturers who could make the masks in California “and perhaps save taxpayers some money.”

Ting, the committee chair, urged Newsom’s administration to give legislators more information about the contract, even if the whole thing can’t be made public.

“We all understand there are some issues that are sensitive,” he said. “My suggestion: it would be good to have a separate legislative briefing on issues that have particular sensitivity… even if you can’t completely share those with the public.”

This article was updated at 8:15 p.m. with comments from the California Highway Patrol.