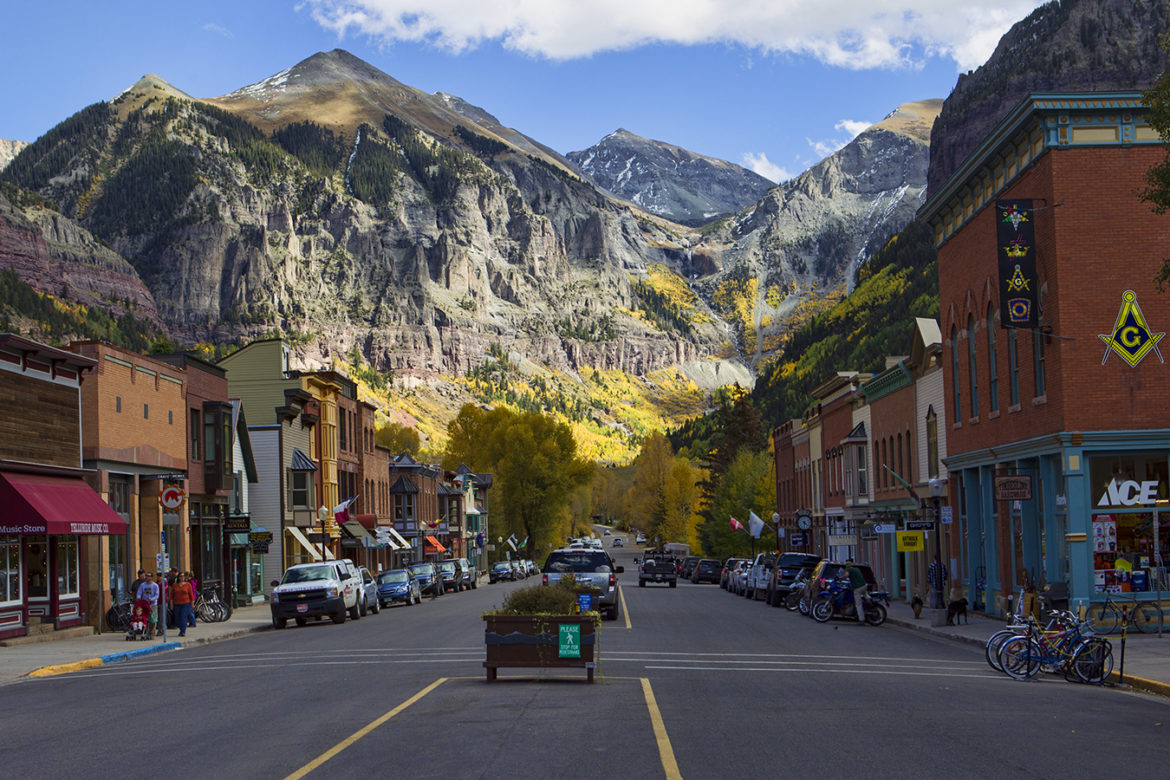 United Biomedical Inc. co-CEOs Mei Mei Hu and Lou Reese donated a new test from their company to enable coronavirus testing for everyone in their ski resort community of Telluride, Colorado, and the surrounding county. (HawaiiBlue/Getty Images)

In late March, residents of the Colorado town of Telluride and surrounding San Miguel County stood in line, along marked spots spaced 6 feet apart, to have their blood drawn by medical technicians wearing Tyvek suits, face shields and gloves for a new COVID-19 test.

While the Centers for Disease Control and Prevention’s tests for the virus that causes the respiratory illness have been in short supply since the outbreak began, this was a new type of test. It wasn’t to see who was sick right now. It was an antibody test that would assess who had been exposed and how widespread the virus was in the community to inform decisions about managing the outbreak.

When part-time Telluride residents and United Biomedical Inc. co-CEOs Mei Mei Hu and Lou Reese had offered to provide their company’s newly developed COVID-19 antibody tests for free to not just Telluride, but all of San Miguel County too, more than 6,000 of the county’s estimated 8,000 residents jumped at the chance.

“People really want to be part of it,” said Donna Fernald, a home health nurse who was tested the first day.

The widespread testing was an experiment in this community best known for its tony ski resort and summer music festivals. But it also served as a model for what, perhaps, could be possible everywhere to guard against the spread of the disease.

“This was a gift and an opportunity,” said San Miguel County spokesperson Susan Lilly.

That was the original plan, anyway. But on Tuesday, the grand experiment with bold aspirations appeared to fall apart. Lilly put out a statement announcing that testing was being “delayed indefinitely due to United Biomedical Inc.’s reduced ability to process the tests due to the COVID-19 pandemic.” Lilly declined to comment on the decision.

The test that Hu and Reese’s company had promoted as “fast — results in two hours” had slowed to a virtual halt. The company had initially told the county to expect results within 48 to 72 hours after the samples arrived at the company’s New York lab. Results from tests conducted March 26 and 27 were announced April 1, but results from subsequent tests have still not come in.

A San Miguel County Department of Public Health and Environment press release quoted a company statement that blamed the delay on operations and the majority of staff being located in New York, where the pandemic has hit especially hard. The press release issued Tuesday said the company is aiming to resume processing the estimated 4,000 outstanding tests from the first round of testing.

But with only a fraction of the results in so far, and additional testing in question, the COVAXX testing appears to be yet another example of the chaotic response to the coronavirus crisis gone wrong.

A Different Kind Of Test

The test that Hu and Reese donated to the Telluride community is an antibody test developed by COVAXX, a newly formed subsidiary of their New York-based United Biomedical. It’s one of more than 30 commercially available tests without Food and Drug Administration approval under flexible rules adopted to address the COVID-19 pandemic. So far only one antibody test has received official FDA approval — a test made by Cellex, which uses just a pinprick of blood and produces results in about 15 minutes.

Antibody tests are fundamentally different than the CDC swab tests currently used to make official diagnoses. Where the swab test looks for the virus’s genetic material to determine active infections, an antibody test looks for antibodies in a person’s blood that show an immune response to the virus that causes COVID-19. Robert Garry, a virologist at Tulane University School of Medicine, said the test can’t tell whether the person is currently sick or infectious.

The plan in Telluride was for participants to be tested twice, two weeks apart, with the COVAXX test because it can take a while for someone infected to show up as positive when measuring antibodies.

The COVAXX website claims its test has 100% sensitivity (that’s the test’s ability to find antibodies to the virus) and 100% specificity (a measure of how good the test is at differentiating this novel coronavirus’ antibodies from other antibodies).

But, Garry said, no test is perfect. And creating an antibody test for the virus being called SARS-CoV-2 is “tricky,” he said, because it needs to distinguish among several seasonal coronaviruses. Furthermore, he added, the COVAXX test is a peptide assay, which he said typically is not very sensitive.

“We know 100% is an almost impossible bar to reach,” Garry said. “It kind of raises some red flags.”

In an interview with KHN before the Telluride program stopped, Hu said that “I always hesitate when I say 100%,” but she said that the company validated the test against 900 samples collected before the COVID-19 outbreak, with no false positives. She added the test also correctly produced positive results from blood samples that have been verified as positive through other tests.

Theoretically, having antibodies to SARS-CoV-2 could make a person immune to the virus, but how robust this immunity is and how long it might last remain open questions. The big promise behind testing a whole community is that if one can identify people who have been infected and recovered (or never gotten sick in the first place), one can safely send them back to work or out in the community, Reese said.

“It’s absolutely my goal to make this standard for how we get the country back to a new normal,” Reese had said before the test was suspended. “If we tested everyone in the whole country and were prepared to do it twice, you would know exactly when you would be back at functioning — everybody back at work.”

Reese isn’t alone in his excitement. Hedge fund billionaire Bill Ackman invested an undisclosed amount of capital into COVAXX through his Pershing Square Foundation, and bestselling author and XPrize founder Dr. Peter Diamandis is listed as part of the COVAXX leadership team on the company’s website. Diamandis presents a fawning interview with Hu and Reese in a widely shared YouTube video, which does not disclose his relationship with the company. Neither responded to requests for comment.

In all, about 6,000 of San Miguel residents were tested at three locations across the county, which covers about 1,300 square miles. As of Monday, only 1,631 of the tests had been processed, with eight (0.5%) of them deemed positive, 25 (1.5%) “borderline” and 1,598 (98%) negative. Borderline results indicate the person may be in the early stages of producing antibodies, Lilly said.

Yet the single tests alone can’t provide a clear picture of how many people have been exposed.

As of Thursday, a total of 11 cases in San Miguel County had been identified with standard swab tests. Officials continue to recommend that all residents practice social distancing and that those experiencing symptoms practice further isolation to prevent the potential spread of COVID-19.

One way to look at this attempt at large-scale testing is that “everybody’s getting together and trying to do something cooperative and innovative,” said George Annas, director of the center for health law, ethics and human rights at Boston University School of Public Health.

“If you wanted to be cruel, you could say this is a publicity stunt,” Annas said.

The program certainly won COVAXX a lot of good publicity, along with gratitude from local residents — at least initially.

And a resort town in Wyoming is following suit. John Goettler, president of St. John’s Health Foundation in Jackson, said his organization is spending “less than $20,000” on COVAXX tests for about 500 health professionals and first responders. Goettler said Jackson resident Dakin Sloss, a hedge fund owner listed as another member of COVAXX’s leadership team, helped secure the tests. Testing is set to begin next week, and the test will be processed at a local lab, rather than in New York.

But in Ouray County, adjacent to San Miguel County, officials decided against such testing even before the Telluride suspension.

The cost “would shoot a hole in my budget for at least the next two years,” said Ouray County public health director Tanner Kingery.

But that wasn’t the only concern, Kingery said. It would have required a large supply of precious masks and other personal protective equipment, he said, while potentially exposing health care workers and community members to the virus.

Dr. Andrew Yeowell, an emergency room physician and Ouray County EMS medical director, also was concerned that negative tests might give people a false sense of security. If people with negative tests felt emboldened to go out in the community and interact with others, he said, it could undermine the county’s advisory to stay home.

“If you’re having symptoms or feel sick, stay home,” Kingery added. “That guidance doesn’t really change if you have a positive test.”