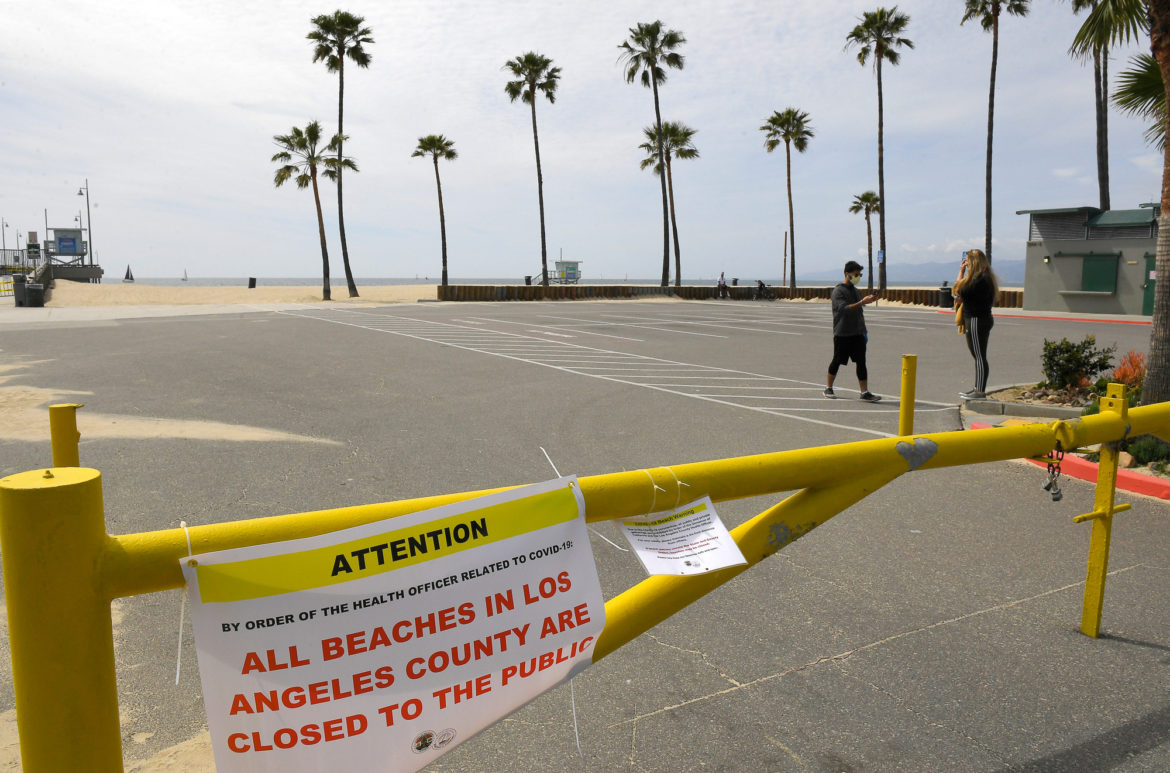 Pedestrians walk through an empty parking lot at Venice Beach, Saturday, March 28, 2020, in Los Angeles. With cases of coronavirus surging and the death toll surpassing 100, lawmakers are pleading with cooped-up Californians to spend a second weekend at home to slow the spread of the infections. It has been more than a week since Gov. Gavin Newsom barred 40 million residents from going outdoors except for essentials. Even so, reports of crowds have prompted local and state officials to warn that ignoring social distancing, park and beach closures could spread the virus, which already is surging. (AP Photo/Mark J. Terrill)

Some evidence now suggests that California’s early decision to adopt aggressive social distancing policies may be helping to slow the spread of the novel coronavirus compared to other key states. But the governor said it’s still too early for optimism.

“We are not out of the woods yet—by no stretch of the imagination,” he told reporters after his daily live-streamed update.

In striking that cautious tone, Newsom is walking a rhetorical tightrope, one that conveys to Californians that our collective sacrifices are bearing fruit, while in no way intimating that it’s time to stop sheltering in place or compulsively washing our hands.

And for anyone in the White House who might be watching, the message from the governor is clear: We could still use the extra help.

“The only regret we will have is if people cut the parachute before we land,” said Newsom.

Did an epidemiological parachute snap open over California 11 days ago when he announced a statewide shelter-in-place order, the widest restriction on civic life in state history? Since then, the number of new cases, new hospitalizations and new deaths have continued to increase — but at a slower rate than the more dire projections issued by both the governor and public health experts earlier this month.

At those rates, the number of confirmed California cases will double in roughly four days and the hospitalized population will double in five. Those are grim prognoses. But at least by some measures, California’s coronavirus curve is bending, and the state is doing far better than New York.

In the last five days, the number of Californians who have died due to the coronavirus has increased by roughly 17% each day, doubling roughly every five days, according to data collected by Big Local News, a repository of publicly available data managed by Stanford University’s Journalism and Democracy Initiative. In New York, the daily increase has been nearly 30%, doubling within three days. In New Jersey, the rate has been 26%; Louisiana and Florida, 24%.

In the San Francisco Bay Area, where six counties imposed a shelter-in-place order a week before the governor, doctors are “now reporting fewer cases than they had expected by this time, both Politico and The New York Times reported.

The timing is significant. One of the more insidious aspects of the new coronavirus is its long incubation period, meaning that an infected person may not begin to show symptoms for 14 days. The Bay Area governments issued their order on March 16, 15 days ago. That order has since been extended through May 1.

Asked today if the California approach is working, Newsom deflected.

“You certainly could look at the numbers and you could jump to that conclusion,” he said. “But all the experts around me want us to be cautious in terms of jumping to conclusions. It’s still too early to tell.”

“I’m all for exhibiting caution,” said Jeffrey Martin, an epidemiologist at UC San Francisco. “But the evidence is encouraging that we’re doing the right thing.”

The most obvious clue: California versus New York.

“I don’t think it would be wrong to say that compared to what it could be, things look encouraging here,” he said. “Is that because of what we’ve done here or because New York simply had a larger initial introduction of the virus? We’ll probably never know that.”

The data that tells of the spread of the virus is riddled with caveats. Though public health experts track the number of new cases, those numbers are influenced by the proliferation of testing, which has varied widely in different states and counties. Data to compare state-by-state hospitalization and intensive care patient rates is lacking.

Death statistics are less ambiguous, but they’re a delayed indicator of the latest hotspot, said Nicholas Jewell, an epidemiologist at UC Berkeley.

“On average, it takes a week between infection and showing symptoms, if you do show symptoms and another week to develop a serious case,” he said. “And then it takes another week or more to die, if you die.”

“Looking at deaths you’re looking at three weeks back in time,” he said. That was before the statewide shelter-in-place. “Three weeks ago we weren’t doing anything, despite my best attempts.”

Newsom, he said, is right to hold off on drawing any major conclusions. Cooped up Californians and reporters are going to have to be “patient” in assessing how things are going as new numbers come in.

And when they do come in, it will be difficult to say definitively why the virus exploded in some places and not others.

New York and New Jersey have so far borne the brunt of the pandemic’s toll in the United States. One possible explanation: They were late to follow California’s lead in imposing new social restrictions. But other possible explanations: New York is a larger travel hub, where people live more densely and are more likely to travel on crowded subways or trains — often to and from New Jersey.

Flare-ups in Florida and Louisiana are being blamed on spring breakers and Mardi Gras revelers.

It’s unclear why Michigan has seen coronavirus deaths tick up at an alarming average clip of 36% each day over the last five day.

Earlier today, Anthony Fauci, director of the National Institute of Allergy and Infectious Diseases, said that public health officials are “starting to see glimmers” that social distancing measures are “actually having some dampening effect” on the spread of the virus.

“We are cautiously hopeful that there has been a flattening of the steep curve because we have not seen the exponential rise of traffic coming in,” Dr. Anish Mahajan, chief medical officer at Harbor-UCLA Medical Center, told CNN. “And that may be because of the stay-at-home order. But it’s far too premature to say because we have done such little testing.”

Other than ordering most Californians to remain indoors, the Newsom administration has been working with hospitals, labs, medical supply companies and federal agencies to ramp up the state’s capacity to test and treat the sick.

Yesterday, he announced a new initiative that would allow retired medical professionals, nurses and soon-to-graduate medical students to begin practicing medicine. Today, the governor announced that 25,000 licensed health care providers have applied to join the ranks of what he is referring to as the California Health Corps — although officials in some rural counties were pushing back, fearing a drain of their own healthcare workers to other regions of the state.

The governor was careful to emphasize that though the daily contagion figures indicate a slowing pace of increase, pushing the modeled projections of total deaths downward, success depends on Californians maintaining a coronavirus-era esprit de corps and keeping away from one another.