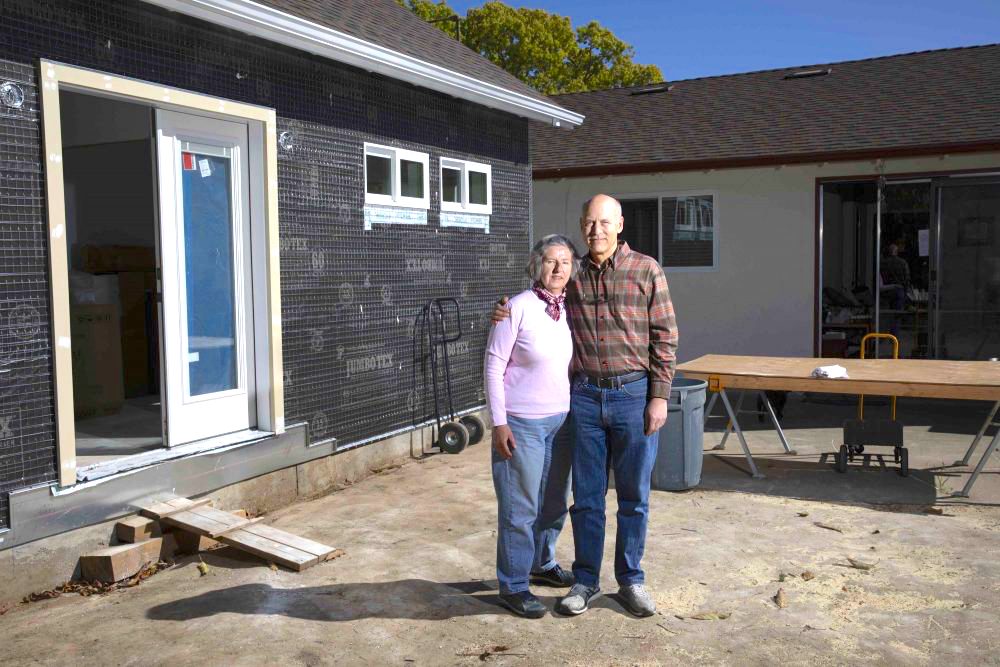 Paul and Rosa Boehm outside the Accessory Dwelling Unit they're building in the backyard of their west San Jose home. Paul and Rosa are considering downsizing into the ADU. Photo by Sean Havey for California Dream project

Paul Boehm wasn’t sure how his daughter would react to the idea of moving into her childhood backyard.

The 63-year-old retired San Jose school teacher thought there was a good chance Daniela and her husband, Rigoberto, would instead join the growing exodus of young Bay Area families heading east to the more affordable Central Valley. They already had seen a few Sacramento properties with a Realtor, and liked what their middle-class salaries—Daniela a special ed teacher, Rigoberto a family counselor for a nonprofit—might be able to buy there.

Paul and his wife, Rosa, 60, didn’t want to travel that far to visit any future grandchildren.

So they approached their daughter with a proposal: They would build a 538-square foot Accessory Dwelling Unit—colloquially known as an in-law unit, granny flat or “ADU”—in the backyard of their west San Jose home.

The Boehms are one of a growing number of California seniors turning to ADUs as a solution to the challenges of aging in a very expensive state—often by moving into the backyard units of their adult children, or by having their adult children move into theirs.

After state laws passed in 2016 and 2017 made it easier and less expensive to build them, ADU’s have exploded in popularity in many cities. Los Angeles received about 67 times as many ADU applications last year compared to three years ago, according to data collected by the UC Berkeley Terner Center for Housing Innovation.

Other major cities have also seen major upticks. San Jose received only 16 applications to build ADUs in 2016; last year that number rose to 350. San Diego’s ADU applications have grown from 28 to 213 over the same time span.

“The vast majority of people that are calling us have family housing issues,” said Stan Acton, founder of Acton ADU, a company specializing in planning and building these types of units.

He estimates that 80% of his clients are interested in multigenerational housing. “Either grandparents or adult kids coming home, or you want to retire and you love your neighborhood … so you build an ADU and you rent the main house.”

Paul’s pitch was simple: Daniela and Rigoberto would live in the backyard unit initially, and pay rent to help finance it. Then, a few years down the road, if the younger couple wanted more space and they still wanted to stay local, Paul and Rosa could move into the ADU and their daughter’s family could move into the main house.

To his surprise, his daughter and son-in-law didn’t hesitate.

“They were overjoyed. I thought they’d want to deliberate and think about it, and they practically spontaneously said, ‘That would be great!,’” said Boehm, who expects construction of his one-bedroom in-law unit to be completed in May.

Aging in place—in the backyard

Paul Boehm has lived in the Santa Clara Valley since he was in elementary school. He and Rosa bought their current home—a cozy 1,200-square foot, single-story house with a big backyard—more than 20 years ago, before either of his daughters had reached their teenage years. Since retiring a few years ago, Paul teaches a class on Santa Clara history at a local adult education school.

“I feel very comfortable here,” said Boehm. “I am very appreciative of having a life where I can live peacefully and safely. And all the people I live next to are extremely friendly.”

That’s part of the reason the prospect of keeping his family local and eventually downsizing to the ADU held such appeal. Research suggests it might help the Boehms live longer too.

“Being able to stay within the same support systems and networks of care in the community, you’re not isolated,” said Blanca Castro-Paszinski, advocacy director for AARP California. “And isolation is a significant public health problem and one that leads to chronic disease.”

AARP California has consistently supported state legislation to make it easier to build ADUs, arguing it was a convenient mechanism to allow California homeowners to “age in place” while producing more desperately needed housing.

Being able to care for her parents as they enter their golden years was part of the reason Daniela Boehm was so eager to move back home. Her father is battling cancer and her mother has experienced her own health problems.

“If those issues come up again, I would feel good knowing that I could be so close to them and provide whatever help they need,” said Daniela.

That’s exactly why Paul Boehm is building his ADU bathroom with the future in mind—a higher toilet, a grab bar. Boehm is mobile now, but he knows that may not always be the case.

“As we get older, things may start going the wrong way,” said Boehm. “This allows us the independent living option so we can live in this house.”

Cost estimates for ADUs vary widely from builder to builder and city to city, and depend a lot on local regulations and fees. One often-cited survey of ADU builders in the Pacific Northwest found an average cost of about $125,000, although California prices tend to skew higher. Acton said a higher-end one-bedroom ADU in Silicon Valley could cost upwards of $300,000.

While not cheap by any means, ADU’s are a bargain compared to buying a home in most California markets. Which is exactly why they’re so enticing to older homeowners confronting an increasingly common dilemma: stuck in an oversized empty nest with hundreds of thousands of dollars in equity but unable or unwilling to suffer the sticker shock of relocating.

“Because of the price of housing today and the transactional costs associated with moving, it’s advantageous to stay in the area you know and love and stay in that same property,” said Alexis Rivas, co-founder of the Los Angeles-based ADU-builder Cover. Rivas said a sizable chunk of his clientele are in their late 60s and early 70s.

California homeowners often tap into the considerable equity of their main home to finance the construction of an ADU. And unlike moving into a new house, under California law building an ADU does not trigger a major hike in property taxes.

That’s especially important for seniors on fixed incomes, who can rent the new unit to supplement their Social Security checks and pensions. Or they can move into the ADU themselves and rent the main property for a steeper sum, according to builders.

Castro-Paszinski of AARP emphasizes that ADUs are just part of the solution for California’s senior housing crisis, and a solution primarily tailored to older homeowners  or seniors with children that own property. Aging in place is a far more difficult prospect for older Californians who don’t own a home.

But even for seniors with the means to build an ADU on their property, the reality of moving into a considerably smaller space than the home they’ve grown accustomed to can be a tough psychological barrier to overcome.

That’s partly why Daniela Boehm felt a twinge of guilt when her parents told her about the possibility of moving into the ADU in a few years.

“I felt kind of weird, thinking ‘oh my gosh, my parents are going to move into the smaller house they built for us,’” said Daniela, who said if she saves enough she might opt for her own place instead of her parents’ place. “And also, ‘dang, I really want to be my own homeowner some day.’”

Paul Boehm said that once the ADU is built, it’ll be more than enough space for him and Rosa. They put skylights in the living room to make it feel more spacious.

And if he and his wife ever feel a need for more space after a marital spat? He has a design tweak for that too.

“That won’t ever happen,” joked Boehm, gesturing to the door. “The threshold there is going to have a sign: ‘No fights allowed from this point in.’”

To read more about the experiences of California’s burgeoning senior population,  visit www.grayingcalifornia.org