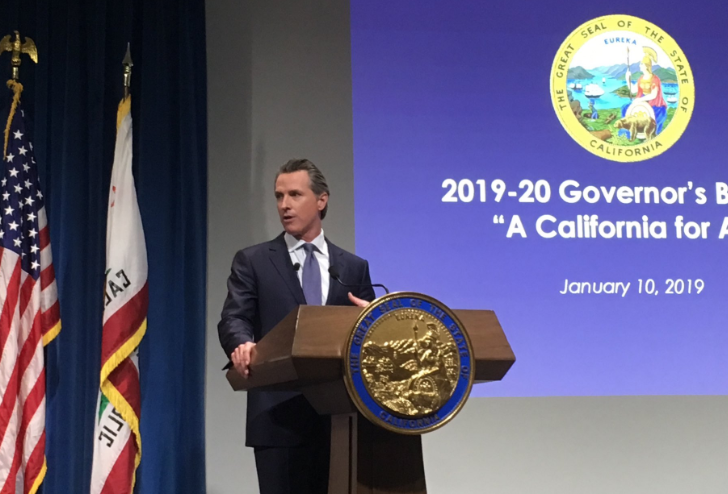 Citing a strong economy and lower-than-projected spending on health care for the poor, California’s surplus is even bigger than expected. Newsom announced a projected increase of  $6 billion in extra revenue to $21.4 billion for the 2019-20 fiscal year. To put that latter figure into perspective, it’s more than the state spends on higher education in a year.

Following in Jerry Brown’s footsteps, Newsom is making public employee retirement liabilities a priority. He wants to put an extra $3 billion into the California Public Employees’ Retirement System (CalPERS) and an extra $2.9 billion over four years into the California State Teachers’ Retirement System (CalSTRS). These payments are on top of the state’s regular pension contribution of $10 billion in the new budget.

Yes, it sounds like a lot but the state has a long way to go. Currently, California’s retirement liabilities add up to $256.5 billion, according to Newsom’s finance department.

In addition to the state’s share of pension payments, Newsom is offering $3 billion to help school districts meet their CalSTRS obligations. Freeing up money for pension payments could allow districts to spend more in the classroom.For Los Angeles Unified School District, it could possibly help avoid a looming teacher strike. Moments after Newsom’s presentation, the district announced it would be sending the L.A. teachers’ union a fresh proposal “to further reduce class size,” and urging state lawmakers to “provide additional funding for Los Angeles Unified.”

Beyond that, Newsom’s  education budget includes a record $80.7 billion for K-14 education and lays the building blocks for a costly early childhood education and childcare agenda. Oh, and he’s also pushing for full-day kindergarten by offering money for infrastructure, aka more kiddie toilets.

College students who are raising children would qualify for a huge boost in financial aid under Newsom’s proposal. Cal Grant awards for qualifying student-parents would more than triple, up to $6,000. Newsom argues that the grants will make it more likely for students with children to complete their degrees, and thus, lift their families out of poverty.

Full-time community college students would pay no tuition for two years under Newsom’s proposal, an increase from current law that makes only the first year free. The state’s two university systems would get more money to increase enrollment and completion, and offer more services to address student hunger and mental health problems. But Newsom made clear that the money is contingent on UC and CSU maintaining existing tuition rates.

Newsom’s budget includes a major $1.7 billion-plus infusion of cash for affordable housing and a big stick for cities who don’t build it—a threat to take gas tax revenue for cities that don’t meet long term affordable housing goals. That’s a potent counterforce to NIMBYs who often stymie the best intentions of local officials, but, as advocates for cities immediately pointed out, it’s also an intrusion on local control.

Included in the governor’s plan, however, is a carrot—$500 million in awards to cities and counties that meet new, short-term housing goals. Other highlights include $500 million in one-time cash for local governments to house the homeless, a quintupling of cash (from $80 million to $500 million) for the financing of apartment buildings for low-income Californians, and $500 million for so-called “missing middle” housing geared towards the middle class. Affordable housing advocates say they’ve never seen this level of attention towards low-income housing in a governor’s budget, and are eager to hear more.

California wildfires are deadlier than ever so Newsom is proposing $121 million to help Cal Fire replace Vietnam War-era helicopters and operate newly acquired air tankers from the U.S. Air Force.

Credit Cards at the DMV

Yes, it’s been decades since Americans started using credit cards. And now the DMV is finally catching up. Newsom announced that, at long last, the California Department of Motor Vehicles will accept payment by credit card. He acknowledged the absurdity, saying, “That is in the you-can’t-make-that-up file.”

DMV technology has been notoriously troubled in the last year, causing long delays for customers and a series of voter-registration snafus. Newsom’s budget proposal funds the DMV at the current level and also calls for spending $50.8 million to create an “Office of Digital Innovation” to, among other duties, work with the DMV on updating its technology.

California created a new state tax credit three years ago, meant to put more cash in the pockets of low-income families. Newsom’s budget proposal calls for doubling the Earned Income Tax Credit, spending $1 billion to give an additional $500 credit to low-income families with children under age 6 and expanding the program to reach an additional 400,000 families. He’s calling it a “Working Families Tax Credit.”

Money to expand the tax credit would come from changes that must be made to the state tax code to conform with the federal tax overhaul pushed last year by House Republicans and President Donald Trump.

Newsom’s budget would push California toward universal health coverage by increasing health insurance subsidies for the working poor and expanding Medi-Cal to young adults regardless of their immigration status.

The state already offers Medi-Cal to undocumented children but the governor’s plan calls for $260 million to cover 138,000 young adults aged 19 to 25.

California is one of the few states offering a paid family leave program, but it’s only six weeks long, at partial pay, with birth mothers eligible for an additional six weeks of pregnancy disability leave. Newsom’s ambitious goal is to expand that to offer six months of paid maternity or paternity leave for parents to bond with a newborn or newly adopted child.

If California can do it, it would be the most generous leave in the nation. But paying for it is another thing. The current program is funded through a 1 percent payroll tax that goes into an insurance program, but it’s all employee-paid and the fund has reserve limits. Newsom will appoint a task force to consider funding options but says there are many options, such as raising the threshold on the payroll tax on high earners.

Matt Levin and Ricardo Cano contributed to this report.