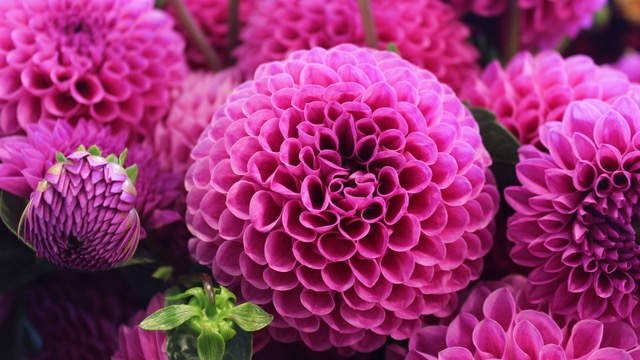 A few years ago, a Day-Glo pink dahlia called to me from outside my local drugstore where it sat next to the dollar item sale table. I tried to resist its siren call, thinking it fancy but not particularly fine. Nevertheless, though I’d come for a box of Band-Aids and some poster board, I ended up taking the gaudy little dahlia home.

I’d never really grown a dahlia before, but I’d seen the electric dahlia display in my husband’s grandparents’ back yard. Like Grandma Pritchett’s jewelry box overflowing with rhinestone brooches, the dahlia garden dazzled in its dotty exuberance.

The drugstore dahlia added plenty of razzmatazz for the first few weeks it was in my garden but then it mostly disappeared. Every August it would send up a single bloom or two just to remind me it was still around, but it never did live up to its siren call.

Not that I did much to encourage it. The roses needed pruning and the potted plants were thirsty and I forgot to do anything about the dahlia until this August rolled around and I spotted it toppled over like a drunken dowager, making a shameful display at the edge of the main path. Feeling guilty, I nudged the few blooms back over the stone border with the tip of my gardening clog and decided I should put it out of its misery.

Apparently sensing its imminent demise, the dahlia started to grow substantially; so much so, that it’s proven to be the showstopper in my fall garden. For the past six weeks I’ve cut bloom after bloom to make out-of-this-world arrangements. And the more I cut the saucer-sized pink orbs, the more exuberantly the dahlia blooms.

Even in mid-October, it’s shooting up flowers almost faster than I can clip them. Frankly, though it continues to sprawl sideways, it’s blooming more outrageously than any plant I’ve ever owned. The Kardashians would adopt this dahlia if they could.

A gardener friend tells me that plants will do this sometimes—that the “sideways growth” can be the most prolific. Plus, by tipping over, he tells me, the dahlia probably found more warmth and sunlight out near the garden path.

Here’s a case of a plant not blooming where it was planted, but scrappily making its way to a better location. You’d almost think I had nothing to do with it, except that by carelessly planting it near a sunny spot in the garden and then by forgetting to properly discipline it, I managed to cultivate a winner.

Though my drugstore dahlia won’t really earn any awards–the bush is entirely too unruly for garden club ribbons—it’s convinced me that dahlias are not only fancy, they’re also mighty fine.

Kathryn Pritchett is a writer and blogger who likes to explore the basic building blocks of good design.  Her writing about design-related things for many print and online publications including the Bay Area News Group where my column Things Elemental ran for many years. One thing elemental to every story I’ve ever written is that design matters.  To some more than others, but everyone responds to color, light and awe-inspiring architecture.