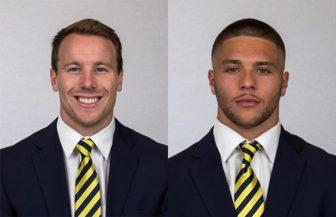 Editor’s note: The following is a Q&A between Josh Yuen, sports editor of The Daily Californian, and Cal football co-captains Patrick Laird and Jordan Kunaszyk. The interview has been edited for clarity and length.

Josh Yuen: If there are a few words to describe this team, what are they, and why?

Patrick Laird: I’d say smart and tough. Those are two things that our coaches preach, and those are top-down values throughout this  team. Others that I’ve been thinking about recently are, together. I feel like our team more than ever plays together between the offense and defense. Caring doesn’t seem like a typical word to describe a football team, but the way we care about each other and our teammates, in my time, has been the best it’s ever been. I think those four words describe my perspective of this team.

Jordan Kunaszyk: I validate those. Those words definitely describe our team. I’d say for me, I’d start with resilient. No matter what adversity we’ve gone through, we’ve found a way to keep pushing and keep practicing and and sticking to our plan. We’ve gone through some times times this season, but we’ve never flinched and continue to get better and continue to win games. The next one I’d say is gritty. We just find a way. It’s not always pretty; we just find ways to win games and it’s really a credit to who we are as a football team. We’re not the most talented bunch, not the biggest or the fastest, but I think what Pat said, we’re smart and tough and we’re together. We just sink our teeth into whatever is thrown at us.

JY: Was there a particular moment this season that truly stands out in terms of significance or excitement?

PL: As far as excitement, obviously the USC win was really fun. I don’t know if I’ve ever had this overwhelming sense of joy after a win like that before. Everyone was just super stoked and the fan base was so excited. In the Oregon State game, I felt like our team really played together, probably the most we’ve played together this season. Defense would make a good play, offense would come on and feed off of that, or the offense would have a big play and the defense would do the same.

JK: The USC game was big, the Washington game was big, but those are just expected when you win games. But I would also say a big point in the season that really stood out to me was last week during practice. I feel like later on in the season, as practice seems to become more mundane and everyday becomes more of the same, with meetings and getting tired. But to see the bunch out there having fun, laughing and out there just enjoying time together — to see that at this point in the season has been pretty exciting for me to see. It just shows how special of a group we have here.

JY: Since Oct. 13, no team has scored more than 21 points against you guys and the team has gone 4-1 in that time against some really good teams. What was the message and mindset leading into that players-led meeting before the Oregon State game?

PL: I think it was just the idea that we have to play together and feed off of each other. Those stats are a testament to our defense. We have a really good defense obviously and so from my perspective, the offense has to do better. We feel like we owe it to the defensive side of the ball to play harder, execute our game plan each Saturday. And so we haven’t exactly done that so far and we want to do that moving forward. We’re not just a team that’s going to settle into what we’re doing, we want to perform better in the future. We had some open conversations about the defense playing well and the offense telling them, “Hey D, stick with us, we’ll try and make some plays for you.” You saw that at the end of the Washington game, at the end of the USC game, when we didn’t have a great game in the first three quarters, but the fourth quarter when the defense set us up for the win, the offense was able to finish. Some of that came down to the conversations we’ve had on Friday nights.

JK: I think during that players-led meeting, the message was just to continue to stick together. We were going through a tough time having lost three straight games. At that time, we could have still accomplished all the goals that we set at the beginning of the season, so the message was to just keep fighting for each other. This season doesn’t have to go this way, and we can change it, and it started now. That message really resonated with the team and from then on, we’ve really played well. I think we’ve still yet to play our best football game of the season and hopefully it’s going to be this week.

JY: If there’s one message that you want to give Cal fans ahead of this Saturday’s Big Game, what is it?

PL: Come to the game and cheer us on. We really appreciate when the Cal fans are loving us up and supporting us. We know that the past history of Cal football hasn’t been the perennial powerhouse that I think Cal is capable of being. We are hoping that this is the program, this is the year, that we start to take it in that direction. Part of that is we want to do it, but the fans also play a part of it. So for them to show up and get loud on third downs for the defense, that’s awesome.

JK: I second that. The message I would send is that we appreciate the constant support through the bad times and through the good times. We’re excited for them to come out on Saturday and support us as we take on Stanford in the Big Game.

JY: What’s one word to describe your excitement for a bowl game next month?

JK: Grateful. Just grateful that we get the opportunity to play one more game. This is my third year at Cal as a junior college transfer. I’ve never been to a bowl game since the past two years have finished at 5-7. I’ve never got to experience that, so for me in my senior year to be able to go to a bowl game and be able to play one more game with this team, with this program that I love so much, and do it one more time, I’m just extremely grateful.

JY: From a football standpoint, what does your future look like after this season and after you leave Cal? What will you miss most about playing for this program?

PL: I’m planning on playing for as long as I can. As long as my health allows me to, I’m hoping to play for a long time. I’ll figure that out when January comes, that’s kind of been my mindset. Focus on this season and play as well as I can since that will help set me up for the next level, but the thing I’ll miss most about Cal is that I enjoy school. I like school, so just going to class and being a student; sometimes you just get caught up in the daily grind of it all. Going to class, extracurriculars, playing a sport here at the university. Sometimes you forget to step back and realize how fortunate we are to literally have a purpose in life right now to learn. I think that that’s just an amazing thing. When I’m in the real world, in the working world, when I’m going to have to provide for myself, it’s kind of a scary thought. So right now, I’m going to enjoy the last couple of weeks where my sole purpose in life is to learn, gain knowledge, and then play a sport that I love.