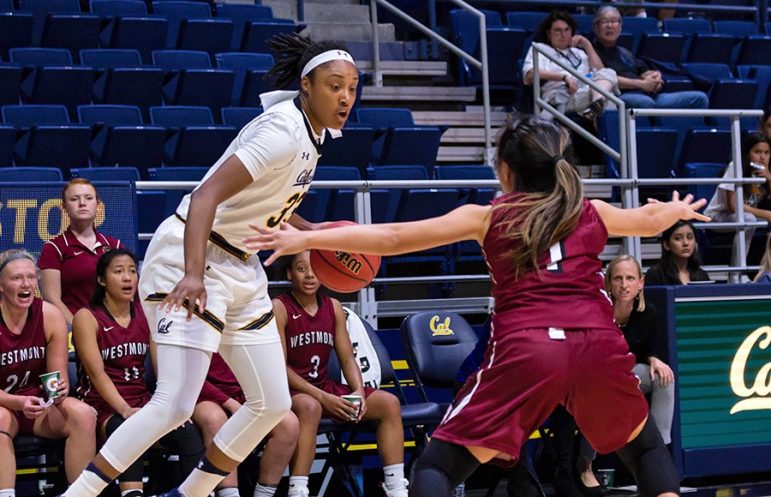 This is Cal women’s basketball.

The Bears have busted out of the gates swinging, refusing to lose in this young season. Behind a supremely talented core of upperclassmen, an elite coaching staff and talented newcomers, Cal has brewed the perfect storm for another NCAA Tournament run.

Back in 2013, Cal women’s hoops was one of the best teams in NCAA basketball, fielding two current WNBA players. That talented squad reached the Final Four, falling in a nail-biter loss to Louisville to cap off its season.

But with its current talent, experience and early-season results, this Cal team is the closest we’ve seen to replicating the magic of that 2013 squad.

At the center of it all is senior Kristine Anigwe.

There is no word to describe Anigwe’s game other than dominant. Through six contests, the 6’4” center has been unstoppable in the post, averaging 24 points, 14 boards, almost 2 blocks and a steal on 64 percent shooting from the field per contest.

Imagine doing anything as well as that stat line reads.

Anigwe is playing arguably the best basketball of her career while etching herself into the record books as one of Cal’s all-time greats. Anigwe is currently the program’s third all-time leading scorer, and if she keeps up her prodigious rebounding rate, she’ll be in contention as one of the Bears’ all-time rebounders too.

While Anigwe may be Cal’s most obvious star, senior guard Asha Thomas cannot be forgotten.

Thomas and Anigwe are Cal’s two longest-tenured starters. But while their bond as teammates runs deep, their play styles could not be more different. Thomas, the 5’4” point guard, is a general on the court.

The former Bishop O’Dowd star is averaging a team- and career-high five dimes per game while also managing a career low in turnovers. Take those passing abilities and couple them with an elite 3-point shot and driving abilities, and Thomas is the perfect player to complement Anigwe’s presence in the paint.

But after three seasons of excellence, everybody already knows just how good Anigwe and Thomas are.

So, let’s give a shoutout to junior Jaelyn Brown.

After being promoted to the starting lineup in 2018, Brown has become a force on the boards. Averaging just a shade more than two rebounds per game in her first two seasons, the guard/forward has shot up to almost seven a game as Cal’s second leading rebounder.

With a promising 3-point shot (Brown led the Bears in 3-point percentage last season) and versatile defense, the junior has shown the potential to be a high-impact player for the Bears — a mirror image of the role that Mikayla Cowling played in recent years.

And with all that being said, sophomore guard Kianna Smith is the next Bear primed to explode.

After finishing her freshman campaign with an inspired performance for the shorthanded Bears in a first-round NCAA Tournament loss, Smith has had an up-and-down sophomore season to date.

Despite starting the season cold in her first two games, Smith turned on the burners while averaging more than 16 points per game over a three-game stretch. In her sixth contest, she scored just 6 points.

Smith has clear potential, and once she starts to gain some consistency, the Bears’ three-headed scoring trio of Anigwe, Thomas and Smith will give trouble to just about any team in the NCAA.

Rounding out the starting five, graduate transfer Receé Caldwell has been a valuable addition to the Bears this season. With active hands and a savvy veteran poise, Caldwell will be a key cog in the Bears’ machine as the season gets rolling.

The Bears have the talent — and more importantly, the chemistry, to make them a truly lethal team this season. Behind two veteran leaders, some improving returners and a talented newcomer, Cal basketball is in position to have one of its best seasons yet.