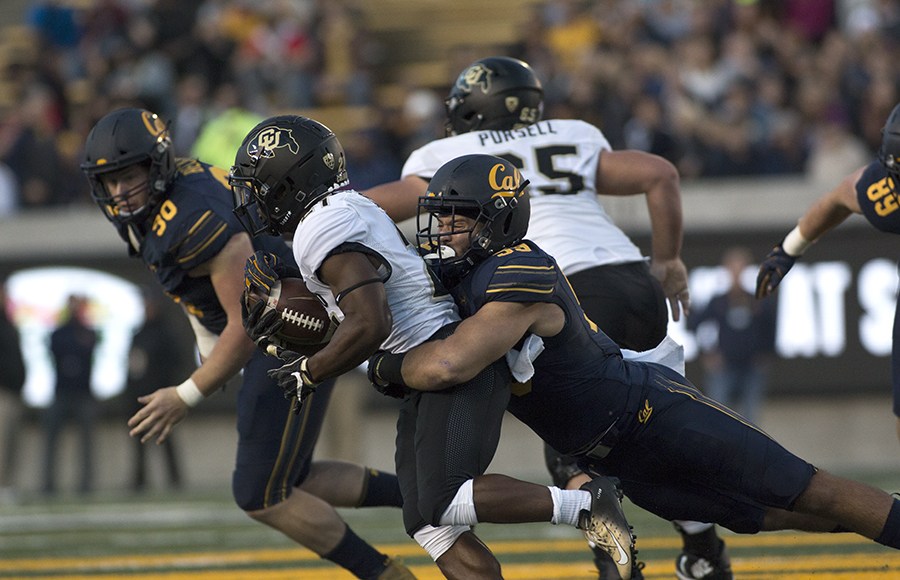 It’s been nearly two months since Cal has scored at least 21 points in a game; seemingly needing to make up for lost time, the Bears amassed 21 points in the first six minutes of play during their Senior Day battle Saturday.

Despite the red-hot start, Cal’s offense looked rather shaky and kept the game within the Buffaloes’ reach all night, but ultimately secured a 33-21 victory. En route to their seventh win, the Bears also denied the Buffaloes bowl eligibility.

From the get-go, Colorado looked sloppy, the stands were rather empty and Cal’s second-to-last home campaign resembled more of a family turkey bowl before Thanksgiving dinner than a matchup in which the Buffaloes were vying for bowl contention.

Just under two minutes into the first quarter, Colorado’s Steven Montez heaved two pick sixes to Cal cornerback Elijah Hicks and safety Ashtyn Davis. It seemed as if the turnovers could not get worse until Colorado’s Ronnie Blackmon fumbled a punt return to total three turnovers in a mere six minutes of play. Two more turnovers, including Davis’ second interception of the day, would come before the half.

While the Buffaloes shaped up in the second half in the game, the damage was done. Despite the Bears finishing 1 of 17 on third downs and totaling 211 offensive yards, the team’s defense once again anchored the victory.

With a career-first multi-interception game, the game’s co-captain and safety Ashtyn Davis is your MVP. He not only had a pick six within the first two minutes of the game, but he also followed it up with a 24-yard interception later in the first half.

Also, shoutout to Evan Weaver, who finished the night with a career-high 19 tackles.

In the first half, each team recorded a startling statistic, though Colorado’s was far more costly. The Buffaloes totaled five turnovers in the first 30 minutes of play, which Cal answered with 21 points. With 14 points coming as a result of the defense, however, Cal’s offense could only muster up three first downs compared to Colorado’s eight.

If a 7-4 record along with a two-game win streak doesn’t inspire fans to pack California Memorial Stadium for a regular-season finale Big Game, nothing will. Though the matchup against Stanford will be a much tougher one for Cal, the Bears have a viable chance of winning the 121st Big Game and reclaiming the Axe after eight years of losing.