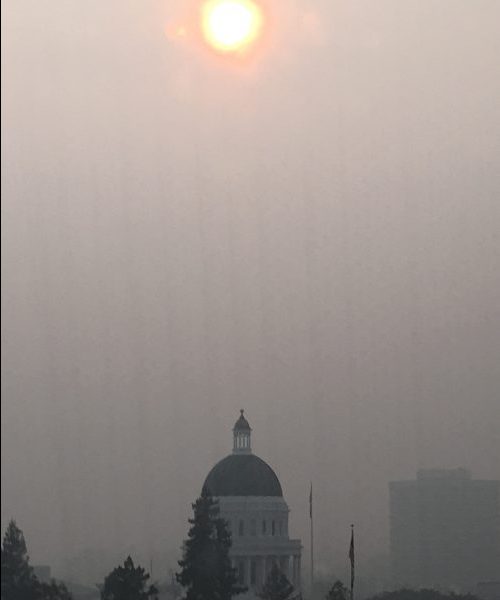 “The president will travel to California this Saturday to meet with individuals impacted by the wildfires. We will keep you updated on details as they are available.”—President Trump’s deputy press secretary Lindsay Walters.

More than 1.1 million public school students have been sent home because of California’s wildfires this week, mostly due to smoke that has rendered air quality hazardous in great swaths of the state, CALmatters’ Ricardo Cano reports.

San Francisco Unified Superintendent Vincent Matthews: “We’ve heard from many staff and families across the city that the indoor air quality has worsened through the week and we want to ensure our staff and students are working and learning in healthy conditions.”

Officials could not recall another time when so many kids were out of school because of wildfires.

Picker’s statement Thursday: “An essential component of providing safe electrical service is the financial wherewithal to carry out safety measures.”

Sen. Jerry Hill, a San Mateo Democrat and a harsh critic of PG&E, is one lawmaker who will oppose any “bailout,” saying that if the Legislature comes to its rescue, PG&E will never “learn its lesson.”

Hill: “I don’t want them to go bankrupt either but that may be the only way that we can have a safe utility.”

PG&E, meanwhile, took out $3 billion in cash by exhausting its lines of credit with various banks late on Tuesday. The cash will serve as a shield as its liabilities mount.

Strategic. Persuasive. Effective. Working at the intersection of business, politics and policy.

What caused the Santa Rosa fire?

As investigators sift through the destruction of the deadly Camp and Woolsey fires, California state fire investigators have yet to issue their assessment of the cause of the Tubbs Fire that killed 22 people last October.

Investigators have reached conclusions about the causes of other wildfires that scorched California in 2017. So why not the Tubbs Fire?

California Department of Forestry and Fire Protection Chief Ken Pimlott: “Very complex fire burning in very difficult weather conditions, winds going in multiple directions. Understand. We want that report to be exactly what it needs to be, accurate, comprehensive. … There is a lot at stake here. It will be ready to go when it’s done. We’re not going to rush that.”

If you must go outside, wear a mask

From Gridley to Sacramento to Alameda, Northern Californians have been breathing fine particle pollution from the Camp Fire that is two to seven times above what are considered to be healthful ranges, California air quality officials reported Thursday.

The California Air Resources Board: “Air quality has been reaching ‘unhealthy,’ ‘very unhealthy’ and even ‘hazardous’ levels in some places over the past week. Even healthy people may experience symptoms in smoky conditions or after exposure.”

The readings are for PM 2.5, particles so small that they lodge in lungs and get absorbed into blood. Anything above 35 as a daily average is considered unhealthy.

Readings in Placer and Butte counties are so high that they are suspect. Officials will check monitors and readings to make certain that they are functioning properly, said Stanley Young of the California Air Resources Board.

Health advocates tell CALmatters’ Elizabeth Aguilera that the state should:

Lucas Zucker, Central Coast Alliance United for a Sustainable Economy: “Counties are the closest to the ground and run a lot of emergency management. But the counties are not going to prepare for it unless the state tells them to.”

Check out your air quality by clicking here.